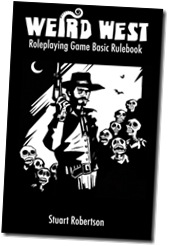 A couple of days ago Stuart Robertson released his extremely rules-light “Weird West Roleplaying Game”. Like the name suggests its meant for “weird western worlds of cowboys, kung-fu, magic and otherworldly malevolence”.

For just 1$ (at DriveThruRPG) you get the game in two PDF versions: one for viewing on your PC, tablet PC or smartphone and a special PocketMod version for printing.

The rules are extremely streamlined but that’s not a bad thing. Of course you don’t get longwinded introductions into roleplaying or an elaborate background, but the rules themselves contain enough fluff elements to get a campaign started in no time. My favorite is the magic and weird abilities section which contains everything from “Electromancy” over “Fastest Gun in the West” to “Shaolin Monk”.

If you are a fan of weird western world you definitely should give this game a try. I hope that Stuart has plans for Weird West supplement and perhaps other games in that format.

And this game made me wondering if a pocketmod version of WR&M might work. Of course the rules would need to be streamlined a bit more to make this work, but this could be a fun project.