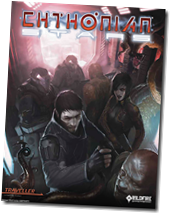 Wow! That was actually the first word I said after laying my eyes upon this fine book. Chthonian Stars totally took my surprise and I mean this in a good way. Wildfire’s latest product is a space opera setting for Traveller directly inspired by H.P. Lovecraft’s Cthulhu Mythos. Wildfire is actually the same company that was responsible for the award-winning CthulhuTech.

As you all well know I am a huge fan of everything remotely Lovecraft-related and I love SF and space opera games. Traveller was actually the first RPG I bought myself and ran, so Chthonian Stars was love on first sight.

In order to run Chthonian Stars you need a copy of Mongoose’s Traveller Main Rulebook. In the coming months Wildfire plans to release a second version of Chthonian Stars using a different system, so if you’re no fan of the Traveller rules you might perhaps pick up that version.

The Chthonian Stars campaign is set into a near future where humanity has started to colonize the solar system. It’s a golden age for humanity but the approach of a large shard of dark matter, known in obscure writings as the Chthonian Star, threatens our very existence. The closer this Chthonian Star gets the more unspeakable horrors start to awake. Formerly dead moons develop alien ecosystems, people go missing all over the solar systems, terrifying things stir in the dark void of space.

The players are Wardens, sent out by the Unified World Council, to learn everything about this new threat to humanity and fight it where ever possible. But as in any good Lovecraftian campaign things are looking not good for humanity… 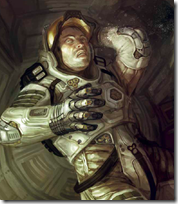 The setting is described in a lot of detail and the great artwork help you to get a feel for what life in 2159 is like. The book also contains a couple of short stories set into the Chthonian Stars universe. If you intend to run a game using this setting you definitely should not miss them. Every planet of the solar system is explained in all details and should give players and the GM a good overview of what the solar system is like in Chthonian Stars.

But of course, the book is not all fluff. Chapter 3 details the character creation method which is a slightly modified version of Travellers point allocation method. There are also new Advantages and Disadvantages that help to flesh out the characters.

Chthonian Stars contains new rules for Horror Checks and Madness, since we all know that no game inspired by H.P. Lovecrafts works could exist without them. There are also additional rules for exotic environments and tips on making combats a bit less deadly. Traveller is already pretty deadly as it is, and the designers of Chthonian Stars obviously thought it might be a bit too lethal when you add Mythos creatures to the mix. And the book actually contains quite a few of those. Even in the futuristic world of the year 2159 you won’t have to miss your old friends the Deep Ones, the Mi-Go or the Night Gaunts.

The chapter about spaceships is quite extensive and not only contains rules on how to create spaceships suited for the setting but also a couple of pre-built ships. Each ship comes with some background information, full stats and of course a Traveller-style deck plan. As I said before, you just have to love this book.

The referee chapter contains a lot of helpful tips on how to run a game using the setting and explains some of the tropes of the genre. The book also provides GMs with several pages of rumors and plot hooks that should help to get a game of the ground pretty quickly even if you don’t wish to use the three fully fledged-out adventures in the back.

My favorite chapter is definitely the one about Secrets, where you learn everything about the Old Ones, the deities known as the eternal ones and what happened millions year ago and what’s going on right now.

In a lot of ways, Chthonian Stars reminds me of CthulhuTech, which is actually a good thing. CthulhuTech managed to combine Lovecraft’s works with the mecha genre and Chthonian Stars does the same with Space Opera. The production quality of the book is great and the Traveller rules are a good fit for the setting. But sometimes you have that dreadful felling of “been there, done that”. That’s of course no surprise especially if you have read several games based on the Cthulhu Mythos.

But if you are into space opera with a good dose of Lovecraftian horror, you should definitely check out Chthonian Stars. The PDF version is available at DriveThruRPG for $15.00 right now and should be available in POD in the coming weeks.

Ask The Readers: Can You Recommend Any GM-Less Games?