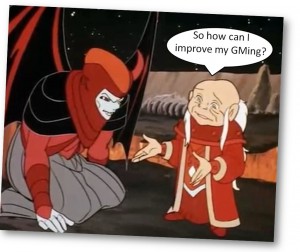 Being a Dungeon Master, Game Master, Storyteller, Referee, call it what you may, is not an easy task. It requires a lot in terms of creativity, passion, preparation, but it’s not the thankless job they make it out to be. It’s a great creative outlet, if you like to tell stories well there is no better pastime, and you get to spend time with your friends, which to me is ultimately the greater reward.

I’m just fresh off from running my weekly Mutants & Masterminds games so many of these thoughts are fresh on my mind. One of the best pieces of advice I can give you is know that not all sessions will be perfect. You can please everybody all the time, strive for your best, listen to feedback and know that there is always next session.

Another thing I have been thinking about is where I’ve learned to be a better Game Master, and amazingly it’s by sitting at other Game Masters’ tables. In a way I’m saying, to be a better GM, be a player. Mind you some players are content with just playing out their characters and that’s that, but if you want to improve your performance at the other side of the screen watch and learn. Be attentive to what works, how they do it, what you like and what you don’t like.

I often say I am an awful player, but in retrospect I like to think I have improved, and in fact I’ve gamed with many fine Game Masters and learned a lot from them. Let’s give some credit to all these wonderful people and what they’ve taught me…

Names have been changed to protect the innocent! (No they have not…)

Luis was my first Game Master. Until them I had only been a Dungeon Master playing D&D and he was one of my players. When he took the mantle this was probably the longest time I was a player and not run a game at the same time. It taught me a lot about learning to concentrate on my character, not want to know every secret and learn to take the hard knocks. But from Luis I also learned pacing, build up and to be a better organized GM. Luis took notes and came to the table prepared, before then I did a lot of improvisation and kept most of the information in my head. From him I learned to better use visual aids and an endearing love for all things dark and Cthulhu related. I have friends who say it’s not Luis’ game unless Cthulhu appears and eats you!

My next GM was José. He was a different type of Game Master. Full of energy, creativity, bravado, and his adventures felt like running at breakneck speed. He did unexpected things, played with the rules and was the first GM that ever played music at the table to set the mood.  His one foible was that he was too fickle, when he got an idea for a change he simply ran with it and sometimes it felt rushed or too random, or we just switched games. I also learned from this, I learned that consistency is important for the continued enjoyment of the game. I must say he evolved his style as a GM, and later games have had much better pacing and an organic feel.

Pierre is a longtime friend and casual GM who had never run any long campaign. He ran one of my favorite games in recent memory, a zombie apocalypse game. I especially liked it because he thinks very different. As a GM it’s easy to fall into runts and repeat yourself. He showed me different ways to do things. Different pacing and he did run a game in one of my favorite genres. Enough said!

Lao is another GM I’ve come to play with in recent years, and the one responsible for rekindling my love for just being a player. We have a lot in common; we like to tell big epic stories in a grand scale. He showed me you sometimes need to cut loose. After running very crunchy, mechanic heavy games, he showed me (in a Mutants & Masterminds 2nd edition game no less) what I knew all along but sometimes lost track of, having fun is ALWAYS more important than the rules.

In recent times I’ve played just one or two sessions or specific games with new friends. Edwin introduced me to indie games, and his quick pick up system is my second favorite zombie game ever. Mario included me in a marathon session of his long running campaign, and while I was a guest star in a long running and well established series, he showed me some breadth and scope that truly amazed me and ran an investigative game with almost twenty people and made it seem effortless. I am really itching to try some of his tactics!

If I’ve missed any Game Master I’ve played with I apologize, it’s an oversight. I’ve learned something from almost every one of you (even from this guy) so my apologies. I am blessed to game with my friends, I’ve said it before and I’ll say it again, they make it worth my while. Thanks for playing guys. You are the best!

So what have you learned from other Game Masters? Any trick or idea you’d like to share? What other experiences you feel make you a better GM? Inquiring minds want to know.