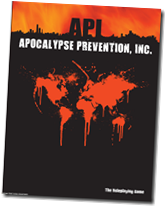 While Third Eye Games’ API has been around for quite a while I just recently had the change to have a closer look at this fine game. While most roleplaying game take themselves quite seriously, API was definitely written tongue in cheek. That’s something you don’t see that often nowadays and in most cases it doesn’t actually work. Luckily API is the laudable exception here. If you enjoy movies like Ghostbusters or Men in Black, Apocalypse Prevention Inc. should be right up your alley.

Let’s start with a look at the physical product. Or at the digital one in this case, because the review is based on the review PDF the author Eloy Lasanta kindly provided. The 184-paged PDF with black and white interiors and a full-color cover and backcover contains all the rules needed to run a game set into the End Times.

The black & white artwork used in AIP has a very distinct style and was obviously created with the setting in mind. That’s a welcome change to the generic stock art often used in small press games. Don’t get me wrong, stock art can be of great quality but sometimes it just doesn’t fit 100%. But I digress.

So what is the game about? Think of our world but with some supernatural twists. The world is constantly threatened by the supernatural and the Apocalypse Prevention Inc. is the only organization standing between us and doom. The company not only investigates supernatural events but also settles disputes between supernatural communities, “greet” newcomers to Earth and fight against evil entities. This sounds a lot like Men in Black but with the supernatural instead of aliens, don’t you agree? And that’s definitely not a bad thing.

As a player you take up the role of an API agent. API agents can not only be humans, but players have the choice between several races. There are Burners (fire demons), Changelings (shapeshifters), Lochs (giant fish-demons), Spectrals (ghost that did not enter afterlife), Taylari (living vampires), Wolf People (werewolves), Carriers (disease-eating demons), Oracles (Demons that can tell the future) and Tark (Unstoppable juggernauts). The latter three are considered illegal on Earth and might run into trouble regularly.

Each player race is described in detail in a format similar to the factions in World of Darkness games. On about three pages per race you get information on the origins, lifestyle, recruitment (into API), appearance and special gifts and drawbacks of that race. The various races look pretty balanced. The gifts of the more powerful races like Burners are evened out by drawbacks. The book also provides us with an example character for each of the races which could be easily used as pre-gens.

Character creation is a pretty quick and straightforward process in API. After coming up with a basic character concept you pick a race and a passion. Passions work a bit like Aspects in FATE but instead of making something up you pick one from a list. Examples for passions are Approval (You seek approval of someone else), Death (You have an obsession with Death), and Warrior (You live for the thrill of battle). In situations where you passion comes in play the GM may grant players a bonus of +2 on their roll and playing out the character in accordance with one’s passion may grant extra XP.

After that you have to distribute a set amount of points among your attributes and skills. After that players get a couple of bonus points they can use freely to buy additional gifts or raise attributes and skills. The last step is calculating a set of sub-attributes which are things like Health, Movement, etc. The character creation chapter concludes with a detailed character creation example. 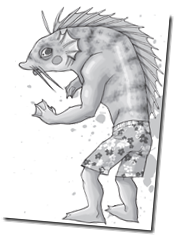 The core mechanics of API involves rolling a d20 adding the appropriate Attribute and Skill. If the result beats a difficulty set by the GM the action succeeds. Rolling natural 1s and 20s causes Critical Failures or Critical Successes respectively. The skill section provides the GM with example Difficulties for standard tasks. All in all API’s rules are what I would consider rules-medium, especially when it comes to the combat rules.

API’s Dynamic Gaming System splits the combat round into 20 Counts of 0.5 seconds each. Each action has a speed value which reflects the quickness of the action. If a character acts on Count 1 and performs a Speed 3 action, he may act again in Count 4. There’s a list of standard actions the characters can choose from. Some of the action also cost Stamina and wear down the character. While the combat system looks like it works fine, I have to admit I am no fan of this level of complexity. But I am sure more tactical-minded players will love what the Dynamic Gaming System has to offer.

An interesting concept are the Fighting/Weapon Styles characters can learn. Each level in a style grants certain modifiers that simulate the actual fighting style. Level 1 of Fighting Style: Martial Arts (Hard) which marks training in Tae Kwon Do or Boxing grant +1 to Strike, Parry, Roll and Grapple for example. Higher levels in combat styles add additional modifiers and even raise a character’s Health or provide him with additional actions during combat. Each style also grants the character a list of techniques like special attacks and defenses.

While the combat system may indeed a bit on the complex side, Eloy didn’t forget to include a detailed sample combat. That’s why I like about API a lot. Even though some of its subsystems can be quite crunchy, you always get detailed examples that show you how things work. I wish some other games would do the same.

The list of gifts and drawbacks provided with API is quite extensive and covers everything from mundane gifts like having an ally at your disposal or being attractive to supernatural drawbacks like being a Magic Addict. But for some reason I can’t really see anyone picking the more severe drawbacks like Blind or Paraplegic, but perhaps that’s just me.

Like many other modern games API doesn’t use money but a Wealth system. When your Wealth is equal to the cost listed with a piece of equipment or a service you can easily purchase it. If it’s not there are rules that allow buying stuff on credit or pooling resources. Again the rules for Wealth are pretty easy and straightforward. The equipment lists contains basically everything players could need and if not, it should be easy enough to come up with additional equipment easily. I especially like the extensive list of cyberware in the game. If you’re not into all that supernatural stuff you easily could run a more cyberpunk-ish game with API. The only thing missing is an elaborate hacking system.

Since we’re dealing with the supernatural in API, a chapter on magic is a must. And again API doesn’t disappoint. There are 18 Paths of Magic with a plethora of spells for each one. You don’t have to make a roll when casting spells but when you are distracted you have to check if you could concentrate properly. The spells are all quite flavorful and there are more utility spells than combat ones, which I like a lot. 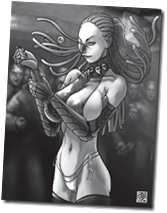 Chapters 4 and 5 of the book, which are named “API Organization” and “Demonology” respectively, give a great overview of the setting and the supernatural creatures coexisting with humans. In the API Organization chapter we learn that in 2008 the USA elected a female president, about the humble beginning of API during the 14th century, the “Moon Catastrophe” of the Depression Era and how API is today. While the chapter is only a few pages long you get a good grasp of what the setting is about and what kind of campaigns you could probably run. The demonology chapter expands on the information already provided in the character creation setting and also adds some more background.

The book concludes with the chapter on “Telling Stories for API” which is mainly meant to provide tips and rules needed by the GM. There’s also advice on how to run games which are not focused on the API. The chapter ends with an extensive bestiary.

All in all Apocalypse Prevention Inc. is a game worth checking out. The basic rules are pretty easy and fast to learn and the combat rules offer a lot of depth and complexity for the tactical-minded player. But I haven’t had the chance to actually play the game, yet, so take everything I wrote with a grain of salt.
If you don’t mind some humor in your action horror game, you’ll definitely love the background, but with some minor modifications (like throwing out the Lochs) you can probably run a serious game as well. The system should also be versatile enough to move even farther away from the included setting.

While I would not wholeheartedly recommend the game to everyone, it’s definitely a great choice for someone who is looking for a modern fantasy/horror game and who isn’t afraid of a mid to high level of crunch.

The PDF version of API is available through DriveThruRPG for just $12.95. You should get the printed version though your FLGS or favorite online shop. It sets you back $24.95 which is a good price for the 184-paged book.