So we’ve covered role-playing games (and I missed a couple of things but I’ll get to that in my next post), other games and minis, but there is so much more to do at Gen Con. One of the things I wanted to get where t-shirts. My last time around I stocked up and while most were worn to tatters, but a couple lasted through the years… So getting new shirts was high on my to-get list. Unlike some games that were impulse buys with t-shirts I took the time to shop around see what was available and I brought the ones I wanted on the last day.

The Off World Designs booth had the official Gen Con t-shirt for sale so I stopped there and got two for friends (including the esteemed creator of this blog to whom I am yet to ship his shirt, shame on me!) and while there I picked up their Boba Fettish t-shirt for a friend. While I love their designs, and just browse their webpage to see some great ideas, in my circles they are probably the best known geek shirts purveyors, so I get to see their shirts on friends… I wanted something different!

That’s when I discovered TSHIRTBORDELLO! I must admit I had never seen their shirts and I loved them immediately. For me it was not a matter of deciding what to get, but sadly realizing I didn’t have money to get one of everything. I found their shirts to be witty, funny, irreverent and terrific! The picture at the beginning of the post is me wearing one of their shirts, Zombie eat flesh. I got two others, their Soylent Green one and their Miskatonic University tee (go pods!) because you can’t go wrong with Cthulhu. The staff at the booth were nice and friendly, gave me some of their terrific posters and as I was paying I saw they had a Bates Motel keychain, snatched myself one of those and its currently holding all my keys together. After having worn them and washing them I can vouch for the quality of the t-shirts.

There was another t-shirt booth I was looking for specifically, one I had visited on my previous visit to Gen Con and I knew they had shirts I wanted. The thing is I did not remember their name. I just knew they had some of my favorite t-shirts of all time, two I still kept around, even if I did no longer wear them out in public. And these are four year old t-shirts, so we are talking excellent quality products. Imagine my excitement when I found them. Now I know they are sighco.com and I can replenish my dark themed t-shirt supplies whenever I want!

What did I get form them, well I got two shirts I had before, their Evil Lager one, and my current favorite t-shirt Sin like you mean it! And in keeping with the alcoholic beverage theme and my love for the undead I also picked up their Zombie Vodka shirt. Their shirts are irreverent, probably offensive to some folk, and I love the look people give me when I wear one of their shirts. They were also incredibly friendly and helpful. Kudos to them and much continued success, they will be getting some more of my money soon! 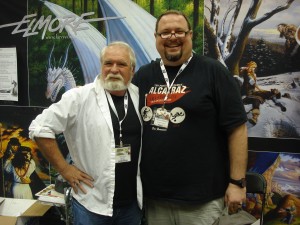 And what else was there to do at Gen Con? Well I’m glad you asked! The artists’ area was full of talented folk, painters, writers; I just wish I had places to display some of the art I saw there. (I doubt my GF would appreciate me hanging the chainmail bikini clad babe art in the living room). I still got some stuff, like signed copies of Larry Elmore’s art that adorned the D&D Basic, Expert, Companion and Master boxed sets. I also got a DVD copy of the Night of the Living Dead Reanimated with a print by one of the contributors. He also did paintings of you as a zombie, I wanted one, but again I doubt the girl-friend would be ok with putting that on display!

I also met Ed Greenwood! He of the famous beard, creator of the Forgotten Realms, and occasional but of my lame jokes here in the blog… (Just see the image on this post. Lame I know!) I got a signed copy of Elminster Must Die and got my picture taken with the man. He is friendly, affable, much taller than I expected, and a good sport after I told him I occasionally poke fun at him here in the blog.

I also got my picture taken with Sean K. Reynolds, one of my favorite designers for D&D 3rd edition and currently for Pathfinder. If you’ll allow a digression here for a moment, my geek shyness was not as bad as it was the last time around (as I mentioned on this post) but I was still star struck with many of these folk. I think the term used by my friends was “giddy as a school girl”. Ok back to the post… 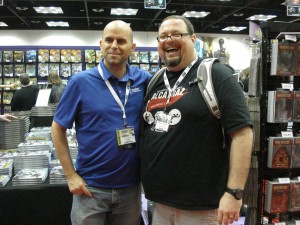 On and there in the middle of the con I had a furniture related nerdgasm! Geek Chick makes beautiful and functional furniture for the discriminating geek, and having lots of money helps too. They had some incredible pieces, some with interactive screens, which warmed my greedy little geek heart. Alas I don’t have tens of thousands of dollars for the one I longed for, The Sultan! But I can still dream…

There was fighting with foam weapons, which I knew little about last time I was at Gen Con, but could appreciate better this time around as I now know people who play it. I delivered a gift from a friend here in Puerto Rico to the fine folk at Forged Foam, who had some gorgeous pieces there! I saw armor, clothes for cosplay, props, lots of steampunk themed stuff. And then there were LAPRs…

I participated in True Dungeon the last time I was at Gen Con, but this time I did not get tickets ahead of time and I was not looking forward to running thought it with strangers so I passed. Still I hear it was a lot of fun. Some of my friend (big shout out to Rouka, Jesús, Chino and Cass) participated in Nero LARP Live Adventure Games. I had no previous knowledge of this organization, but it seemed like fun and they certainly seen to have enjoyed it!

There were lots of other things at the con as well… Webcomics (the Looking for Group guys were hilarious and incredibly friendly even if I did not spend a penny at their booth), terrain building materials, maps (the Gale Force Nine had some terrific stuff), new social media sites for gamers, like Infrno (I just activated the account I created in Gen Con while writing this post), I got some gifts at The Warstore (an online store I have purchased form before, and I recommend them) and of course dice! What self respecting gaming geek can resist the lure of dice? I got some dice at Q-Workshop, they have some gorgeous pieces, even if they can often be hard to read. But so pretty to look at!

I was impressed by the amount of children and family friendly activities there. It makes sense; games come in all shapes, sizes, ages and family configurations. When I have children I would LOVE to bring them to Gen Con. Someday…

Oh and before I forget this guy was at Gen Con. Funny… Enjoy