I am terrible when it comes to coming up names for my characters. So whenever possible I make use of random name generators. As I mentioned several times before I am currently waiting for my copy of Airship Pirates to arrive. Alas I don’t know above the setting yet to make plans for a campaign, I already started looking for a tool to help me to create names for NPCs. Luckily I stumbled upon Spencer Rhodes’ Victorian & Steampunk Name Generator. 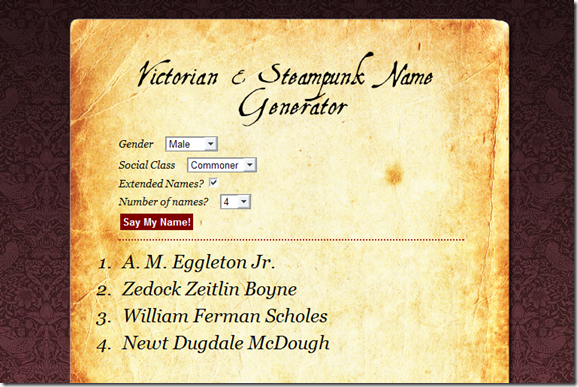 The web-based generator allows you to generate up to 15 randomly generated male or female names suited for a game set into the Victorian Age (or a Steampunk equivalent). You can choose between the various social classes. I am sure this random name generator will be invaluable for me in the future!