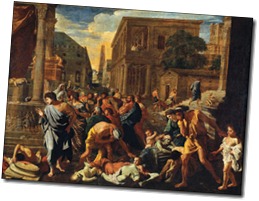 Earlier that week I have been coping with a nasty cold. My head felt like someone smashed it with a sledgehammer, I was freezing all the time, overall I felt awful. And don’t get me started on the coughing, sneezing and my running nose. When I got a bit better, it actually got me thinking about diseases in roleplaying games.

But much like poisons, diseases don’t usually have a big impact on roleplaying games. In most high fantasy games everything that doesn’t kill you immediately is just a minor nuisance. D&D for example knows a couple of spells that can easily heal any disease and even resurrecting the dead is just a question of how much you can pay.

But in other settings diseases can actually be used to make things much more interesting. Even infecting the player characters with some nasty bug can add to the game if done well. Of course this only works when the disease doesn’t render the characters totally helpless and if there’s some chance to get healed.

In my opinion your fantasy world gets much more interesting when you add some more realism to it. In medieval times people lived in pretty bad conditions. Hygiene was often an alien concept, people lived extremely close together and diseases that are easily cured in our modern world, have been real killers back then. But in most quasi-medieval fantasy worlds everything is clean, people don’t seem to get sick and even if they do, the village priest knows a spell to fix everything.

I am always overjoyed when I read a roleplaying game rulebook that lists some diseases you can actually use. Too often than not diseases are too deadly too fast to actually be used on the player characters. If you get killed by a bugbear in a fight it’s one thing, but it’s just no fun when you die and turn into a nasty demon because of Nurgle’s Rot. Warhammer Fantasy Roleplay 1st Edition I am looking at you here!

So how can you add diseases to a game effectively? That’s a question I keep pondering, but I haven’t found a solution I am 100% content with. I’ve used diseases in games before. Usually I use sicknesses and plagues as a backdrop, much like I sometimes use wars. The players themselves are not directly afflicted by it, but the world around them is. City quarters are quarantined because of some outbreak of the black plague, people are fleeing from their homes to avoid getting infected, etc.

When you want to affect the players with diseases themselves, you need to think about what effects the disease has on their skills and abilities. In games like FATE you could use a temporary Aspect that lasts until the character has been healed. In other games the symptoms may cause negative modifiers on skill or attribute rolls.

An ambitious GM may even do some research on real sicknesses and try to emulate the effects in the roleplaying game or may invent some fictitious ones. Even a simple cold should have some major effect on the combat effectiveness of the players, or have you ever tried solving riddles with a splitting headache? Whatever you do, try to use diseases as a way to make the game more immersive, more “real”, and don’t just use the effects of some sickness to make the life miserable for the players. The game should still be fun.

What is your opinion on using diseases in roleplaying games? Love ‘em or hate ‘em? Is there a game that handles diseases really well? Or do you know some of the very bad examples? Please share your comments below!