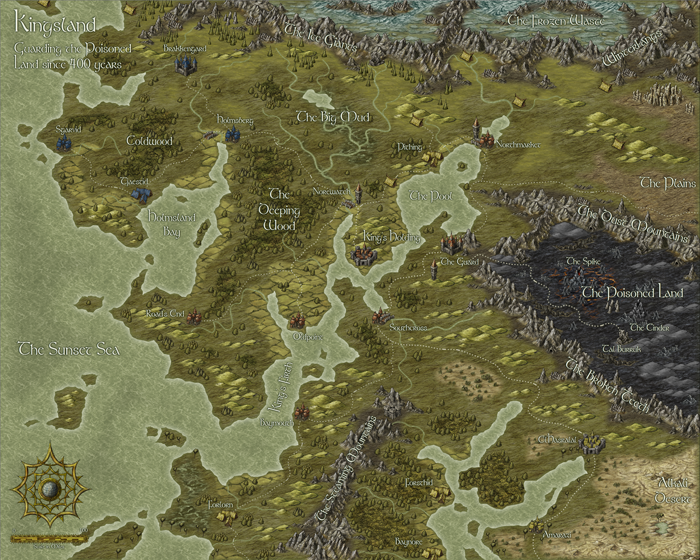 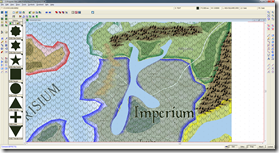 Campaign Cartographer 3 is definitely one of the RPG tools I wish I had more time to work with. When you design your own campaign setting or even if you’re just running a game, maps come in quite handy. Not everyone can draw them by hand, so map-making tools are quite popular.

The main drawback is that CC3’s learning curve is pretty steep. As you can see in the screenshot above the UI can be quite confusing at first. If you feel totally overwhelmed by the UI, you can decide to pick the “Simple Menu” during installation. You can of course switch to the full menu later.

But when you have managed to get used to the somewhat awkward control scheme you have a very powerful map-making tool at your fingertips. CC3 comes with a set of predesigned templates that help you to create professional-looking maps in just a few hours or mere minutes depending on how detailed the map should be. The templates provide you with matching terrain features, symbols, etc.

And there’s one more advantage to programs like Photoshop or GIMP: I followed a few tutorials for Photoshop and was able to create awesome-looking maps but after I was done I actually had no idea what I’ve just done. It still felt a lot like voodoo to me. This is different in CC3. After following the tutorial once I pretty much knew what every step on the way to the final map was and how I can use each method again in the future. Maybe the learning curve isn’t that steep at all.

CC3 is vector-based which is one of the huge advantages over applications like Photoshop or GIMP that are also quite often used for map-making. That means you can zoom in almost indefinitely without losing detail. But like Photoshop it supports layers (called “sheets” in CC3) and sheet effects. Sheet effects are what really make CC3’s maps shine. You can add a contour to coastlines, blur the borders between different terrain types etc. Alas rendering the sheet effects is quite CPU-intensive, so it’s recommended to turn off these effects when working on the map. Of course each drawing style comes with predefined sheet effects, but you can of course customize them to your hearts content.

The good thing about CC3 is that you don’t need a lot of skill to get started. When you’ve wrapped your head around the control scheme, creating a first map is actually pretty simple. I recommend anyone who wants to start working with CC3 to check out Joseph Sweeney’s tutorials on YouTube.

The Addons: Dungeon Designer 3, City Designer 3 and Cosmographer 3
If you mainly create overland maps CC3 is sufficient, but if you are interested in creating dungeon or city maps, I highly recommend to check out the addons City Designer 3 and Dungeon Designer 3. And if your are interested in creating maps for your SF game, you really should get the Cosmographer 3 addon. The latter is actually my favorite addon and it comes with an impressive list of new features.

The addons are all about making your life as a map designer easier. The City Designer Street Builder tool lets you add an entire street lined with different building with just two clicks. The new symbol sets included on the City Designer CD-ROM contain symbols for basically every genre. I found it particularly handy that the building symbols neatly align with the roads.

As mentioned above the Cosmographer is my favorite addon so far. I am a huge fan of SF roleplaying games and until now I found it extremely hard to create good looking starmaps, system maps and Traveller-style planet maps. Cosmographer makes these tasks much, much easier. It also provides you with tools and symbols for creating starship deckplans.

The Cartographer’s Annuals
A good source of additional drawing styles and symbols for CC3 and its addons are the Cartographer’s Annuals. Each month subscribers of the Annuals get a new drawing style, symbol set or some other small addon to their CC3. Instead of subscribing to the monthly updates you can also buy the Annuals of previous years as full product.
Each of the Annuals also comes with a Mapping Guide that not only shows you how to use the new styles but also help you to learn more about what you can do with CC3 in general.

Conclusion
As I already mentioned, CC3 has quite a steep learning curve. If you want to get most out of CC3 you definitely should read the manuals, follow a few tutorials and most importantly you need to practice. But that hard work is definitely worth it. With some practice you can create very cool maps and the software is much less expensive than – for example – Adobe Photoshop. Alas CC3 is available for Windows only.

Especially if you are looking for a software that allows you to create various kinds of maps with relative ease, you won’t find anything better than CC3.

So what does CC3 cost? The core application sets you back $44.95. Each of the Cartographer’s Annuals and most of the addons costs $39.95 each. Aside from the addons mentioned in this posts, there’s also the relatively new stand-alone application called Fractal Terrains 3 which allows you to randomly generate whole worlds among other things, and a few older addons that haven’t been fully updated to CC3 yet.

You can get CC3 and it’s addons either directly from ProFantasy Software or from any of the shops listed on the site.