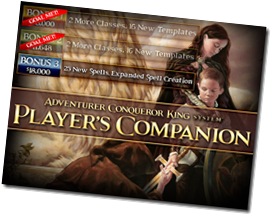 There’s another Kickstarter project that grabbed my attention. Autarch is currently raising money to fund an expansion to the very intriguing Adventurer Conqueror King System. I picked up the core book a while ago and posted my initial thoughts on the blog.

The Player’s Companion will contain new classes, 144 character generation templates, new spells and a point-based customized class system. That allows you to create your own classes. As with the Kickstarter I mentioned in my last post, Autarch has actually already reached their goal of $4,000 already, but that’s no reason for you not to back the project.

Backers can actually already download the current draft of the rules, and there will be another bonus level at $25,000. If this goal is met, all backers will get a special preview of the Auran Empire Campaign Setting. You still have four days to back the project.

For more details check out the Kickstarter page or the official ACK site.

Excited about “Monster of the Week”