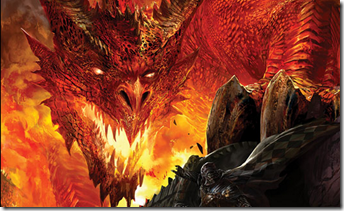 The D&D playtest rules have been out for a while, and there are a lot of heated discussions everywhere on the internet. What didn’t surprise me at all is the fact that most fans of 4E hate the new edition. This is actually no surprise because there’s almost nothing of 4E left in the current playtest rules. You can easily get the impression that WotC is throwing its current fans under the bus in order to appease its former fans. I may be one of those since I am one of the people that played a lot of D&D 3.0/3.5 back in the day, but stopped playing long before Pathfinder came out.

From what I’ve seen so far I like what WotC has done with D&D Next. The rules look a bit old-school but especially backgrounds and themes set it apart from the OD&D retro-clones out there. Some of the mechanics like advantage/disadvantage are pretty neat in my opinion and it looks like a game I would play. But having said that, my excitement of the first few days has already waned.

I don’t know whether it’s my fear that we only saw the tip of the iceberg and that the rest of the game may be a mess after all, or that the ongoing heated discussion has already burned me out. At least they recently changed the official FAQ to allow online playtests using Hangout, Skype etc.

I still might look for an online playtest group, but the longer I think about it, I wonder why I actually should be excited about D&D Next. I could easily take my favorite retro-clone, add in a few stuff myself and adopt the advantage/disadvantage mechanic. I don’t need to wait for the D&D Next release to play such a game. This way I can also avoid every 4E-isms that might creep into the game over time.

I am pretty sure that the D&D Next books will be great-looking (like most recent WotC stuff), and the current playtest rules don’t look too bad, but I am still not entirely sold. I am about to start playing Legend (Mongoose’s latest Runequest game) and from what I’ve seen so far, it might fit my preferences much better than any edition of D&D. But since D&D is the grand-daddy of all other RPGs out there, I’ll probably keep an eye on it after all.

Some Thoughts on the Dragon Age RPG