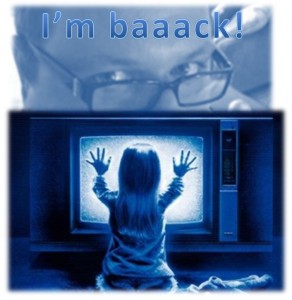 Who is that Sunglar listed under authors in the right side column of the blog? When was the last time this purported Puerto Rican blogger wrote anything here?

Hello friends! For those three of you that missed me, like hard to get rid of poltergeist, I AM BACK… Last time I posted here in Stargazer’s World it was April 10th and I was planning my Savage Worlds zombie game. What happened to me since then and what have I been up to?

Well, glad you asked! I was recruited by an international secret cabal that covertly protects the world from the threats that would bring an end to civilization as we know it. Ok, no, not really. It’s been nothing that fancy. Mostly real life, work and classes…

I don’t recall if I mentioned it before, maybe Michael mentioned it on one of his posts, but I’ve gone back to college. I’ve decided to get a Master’s Degree in Education with a Specialty in Curriculum. I have a background in education, and have worked in the field for fourteen going on fifteen years. But my previous studies have been in communications and English Literature (not that you’d know by the way I write!) and I’ve finally decided to get a Master’s related to what I do on a daily basis. I am having a blast, but since it’s an accelerated program I’m taking classes in 5 week cycles, doing a lot of work at night, which eats up my blogging time. Add to that, that things at my new job (which I began a little over six months ago) are taking off and some projects are proceeding apace, so I have been busy.

That doesn’t mean I have stopped gaming, just haven’t had that much time to write about it. I’ll try to fill you in on what I’ve been up to.

As I mentioned on this post due to personal issues some of my players were absent from the game for a couple of weeks. We decided to put our Mutants & Masterminds Dawn of a New Age campaign and play a short adventure. We settled on a zombie game using Savage Worlds. What was originally supposed to be a 4 session adventure morphed into a 6 session, because the players requested it! I

I considered it a success, got to learn a whole lot more of the system running it, and the bits we liked (most of it) and the very few we did not. Overall I think my players enjoyed it and are sold on the idea of playing it again. I am definitely using it for a future campaign, more than likely the sci-fi one. So a note to the Pinnacle folk, get cracking on the new Sci-Fi Companion!

The other great thing about the zombie game was playing with some friends I have barely, or in one case never, got to game with. It’s always refreshing to get a new perspective at the table. Hector and Enith were AWESOME players and I look forward to having them game with us again again. 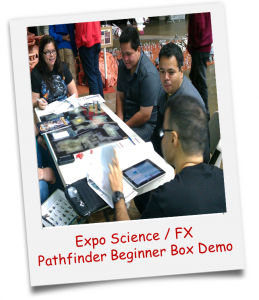 Besides my regular Tuesday gaming nights I also participated in a local sci-fi convention, the Expo Science FX. The organizers were kind enough to provide Puerto Rico Role Players with a space to do demo games, exhibit books and share information about RPGs. Enith, Braulio, José, Luis and Rodney, Puerto Rico Role Players members, helped me at the con and I got to run part of the adventure in the Pathfinder Beginner Box for two experienced and two newbie players. Rodney also ran a couple sessions of Marvel Heroic Roleplaying Game and I got a better idea what the system is about. Interesting, it definitely presents very unique mechanics that emulate a certain type of comic gaming. It may not be my choice for supers game (currently its Mutants & Masterminds) but I was intrigued enough to pick up the game on PDF.

At the convention we also had some miniatures and terrain on display and a few minis games were run. We also raffled a copy of the Marvel game donated by Anibal and a castle constructed by Mario, both members of the Puerto Rico Role Players group as well. 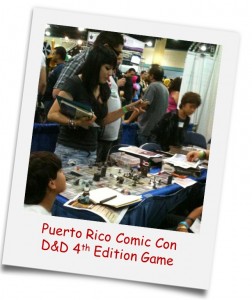 It seems its convention season in Puerto Rico, since soon after that one there where two more conventions in a row. First there was Kaisen 10 held in Cataño and the Puerto Rico Comic Con held at the Puerto Rico Convention Center. Since I had to work one weekend and a trip already planned the next, I missed both conventions. We had no members able to go to Kaisen so we sadly were not present, but their next installment is September 15 and 16 and I’m not missing it. For the Puerto Rico Comic Con our friends at Gaming Zone shared their space and allowed Puerto Rico Role Players to do demos in his booth. I was not there but as the pictures show there was a lot of gaming going on.

Let me take a moment to thank the people that helped us, the organizers of the Expo Science FX, Kaisen and the folk Gaming Zone store for thinking about Puerto Rico Role Players, and inviting us to all these activities. Thanks to all my friends for their support in both activities.

So what was I doing on my trip? I was visiting San Francisco for the very first time! It was a family trip for my sister in law’s graduation (congrats Jeannice, love you!) and while the emphasis was NOT in gaming related tourism, I did manage to discover a little bit of the San Francisco  gaming scene. 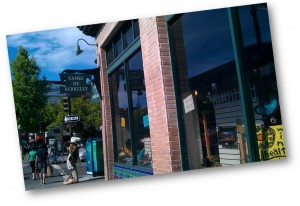 I passed by Gamescape in Lower Haight, alas it was after business hours. Where I did manage to go was Games of Berkeley. This is not just game store, it is so much more. They had games, toys, miniatures, and a gaming area. I really loved it, employees were friendly and helpful, and their game selection was outstanding. I got some newer Paizo stuff while there:  The Pathfinder Adventure Path #56, part 2 of the Skull & Shackles series, which I love and I’m using as inspiration and material for my soon to be retaken Pathfinder swashbuckling campaign. This Adventure Path has me buying adventures again, something I haven’t done in a while. I also got the Giants Revisited, the GameMastery Chase Cards, the Buff Deck and the Skull & Shackles item cards. I did get another game, Fantasy Craft I had been itching to get my hands on a hardcopy of this massive book and I really it so far. I love my crunch!

As an aside, if you have never been to San Francisco and make your way there, check out the City Lights Bookstore. They are not a game store, but a wonderfully diverse and enticing bookstore. I found some gems there and recommend it wholeheartedly for any lover of literature.

I also got some RPG books on PDF via RPGNow, besides the Marvel RPG. I got the Book of Magic: Pirate Spells for my Pathfinder game. Mercenary Breed (Expanded Edition) to feed my Savage Worlds addiction, I loved the book although I would have loved more art, especially for the alien races, but this is a solid product and I recommend it to e fans of the game and the genre. The Genius Guide to Death Knights was a GREAT purchase. I am rarely disappointed by Super Genius Games, and since the Death Knights are one of my favorite monsters, the idea of having a Death Knight class to play with was intriguing. It ended up being so much more; they are being used for an order in my long running fantasy game, kudos to Owen Stephens for a terrific supplement.

That pretty much covers my gaming related activities over the last two months. Last night we went back to playing the supers game, it’s on its last stretch and I’m excited to bring it to its conclusion. This ramble has lasted WAY to long. Time to sign off!

One last thing… Even if I don’t post as often I occasionally talk on about games (and other stuff such as movies, politics and issues near and dear to my heart) on social media. So if you are at all interested on reading about that be sure to follow me. The pertinent links are in my author page here in the website.