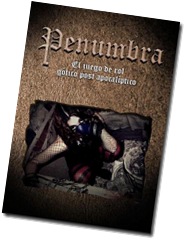 The game itself is available as a free PDF but the author also accepts donations. I haven’t had the time to give it a closer look yet and I have to admit that I am not too fond of the gothic aesthetics of the book, but there’s nothing wrong with a free RPG, isn’t it?

The author is also looking for feedback and some help with spreading the word. If you find any issues with either the rules of the translation feel free to send your feedback to info.penumbra@gmail.com.