Welcome back to another instalment of my current post series Sci-Fi Fridays.  For the uninitiated, I’m presenting the background materials for my upcoming Savage Worlds campaign which I’ll be running for my gaming group in the near future. If you want to read the previous post, check out Part I, Part II and Part III. On this post we leave the Outlands and expand into the greater galaxy to learn more about the Union, and one of the stellar nations that form it.

I hope you are finding these posts useful, that you find some inspiration, or even use them to show people how you can overdo campaign background! I look forward to your comments and critique. Now let’s venture forth into the Union…

The Outlands are the fringes of the Union; however even in the Outlands the greater galaxy influences the lives of those seeking to escape it. The Union is a relatively new political entity, a beast born out of the Great Galactic War. In theory it is an extra-governmental body appointed with keeping the peace, maintaining security and creating a common economy, a level playing field, that benefits every world in the Union. The Union has existed for merely 13 years, three years before the end of the Great Galactic War, and it depends on the three majority members to survive, the Rukta Workers Consortium, the EIN Triumvirate and the Freeholds of Alpha Centauri. 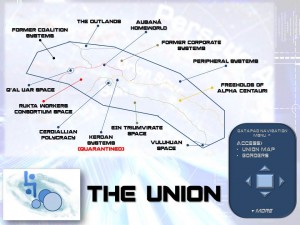 The Union Council is a representative body where all member stellar nations, systems and planets, send delegations elected by majority votes among their populations. The Council is further divided into myriad commissions, and the Rukta Workers Consortium, the EIN Triumvirate and the Freeholds of Alpha Centauri hold veto power in many of them, but most importantly the Commerce and Trade and the Galactic Security commissions. The Union is large and bureaucratic, slow to act in most areas except the military. The Union Armed Forces (UAF) was the first component of the Union to be created and remain a well-oiled machine used to enforce the policies of the Union. The UAF is composed of military officers, most whom hail from the majority members. While many Union citizens believe some officers are still loyal to their original governments, the new crop of officers has proven committed to the ideal of the Union, by any means necessary.

The term corporation has almost become a dirty word. The dismantling of the Mega Corporations sought to break apart monopolies and heavily regulated the sphere of influence corporations can participate in. Corporations cannot maintain a military, are heavily limited in the security forces they can hire and their ships armaments are strictly controlled. Most corporations avoid the term, instead preferring the terms enterprises, combines, trusts, syndicates or outlets. All corporations work under the draconian Union Patent Authority (UPA) which authorizes corporations to work in different areas and reserves some business fields for special Union projects, such as shipyards and most weapon manufacturing. The corporations that still exist after the Great Galactic War are still paying reparations to the Union and the UPA oversees almost all their operations. No corporation holds dominion over planetary settlements, stations of significant size, and cannot claim employees as citizens.

Within the Union there are powerful stellar nations or blocks, the three most influential ones being the three majority members of the Union, the Rukta Workers Consortium, the EIN Triumvirate and the Freeholds of Alpha Centauri.

The EIN Triumvirate had its origins in the Earth based Eire-Indo-Nippon Block. A strategic alliance between the old Earth nations of Ireland, India and Japan; after the first and second Gen-Plague swept Europe and northern Africa and the resulting quarantine, this block became the major economic power in old Earth. After first contact with the Cerdiallian and the Kerdan Wars, the Eire-Indo-Nippon Block expanded into near Sol life-sustaining systems and became a major player in galactic politics. It went through a period of upheaval during its initial expansion and three families consolidated power in the stellar nation that eventually became the EIN Triumvirate. This stellar nation is ruled by three Councilors who meet in the EIN Triumvirate Ruling Council. The triumvirate is organized as a Constitutional Monarchy with three heads of state. The Council recognizes the Premier of the People’s Council, elected by its members, who in turn are elected by the citizens of the EIN Triumvirate. The Premier organizes his Cabinet and the People’s Council consent is needed to enact into law the bills proposed by the Premiere and his or her Cabinet.

Individual planets are Holdings of the Councilors and while their citizenry elect representatives to the People’s Council, local administrators and civil servants are part of a complex system of familial ties to lesser noble families and traditional allegiances to the Councilors’ bloodlines. As a general rule Councilors have been benevolent and protective of their holding’s citizens, and the EIN Triumvirate is a paternalistic stellar nation, offering many social safety nets and aid to its citizens. Communal wellbeing is preeminent over individual rights, but the People’s Council customarily safeguards the rights of its citizens to freedom, security and to be well informed and educated.

The judicial system in the EIN Triumvirate varies according to different Holdings, but some matters are handled in Council Courts whose ruling applies to any Holding. Just as with the administrators and civil servants of Holdings, citizens do well to learn the customs and traditions of specific Holdings. However, most Holdings demonstrate a strong tendency towards treating criminals humanely and there is an emphasis on rehabilitating the incarcerated and reintegrating them effectively into society.

The EIN Triumvirate is probably the most business friendly of the three majority stellar nations in the Union. They have opposed the most restrictive measures enacted in the Union against corporations, but the two other majority members have blocked their attempts at allowing larger corporations to reform in the Union. However inside the Triumvirate many savvy businessmen and women have found ways to profit from the new emerging structures.

There is a fierce tradition of journalism and artistic output in the EIN Triumvirate, often at odds with local Holding authorities. The decisions of the People’s Council have consistently protected the rights of journalists and artists, only limiting them significantly during the Great Galactic War, when even some legal rights were curtailed for the protection of the Triumvirate’s interests.

The position of Councilor is hereditary, but Councilors can select which member of their bloodline inherits the position. Control of the military was traditionally held by a High Commander selected by the Ruling Council and approved by the People’s Council. Since the formation of the Union the position of High Commander is mostly ceremonial as the EIN Triumvirate has relegated most military matters to the Union Armed Forces (UAF). The High Commander is now in charge of the EIN Stellar Guard, a token military force tasked with routine patrol and the enforcement of local tariffs and immigration statutes.

And I think that’s a good cut off point for now… Net week we’ll learn more about the other two majority members of the Union, the Freeholds of Alpha Centaury and the Rukta Workers Consortium.

I also have a quick question; I’m working on the house rules for the campaign and would LOVE to have our readers give me feedback on them. After we finish the Greater Galaxy section, would you be ok with looking at the house rules? Or would you rather I finish the fluff and leave the crunch for the end? Maybe I could do the house rules as another post, not part of the series… What do you think?

Regardless, thanks for reading, see you next week!