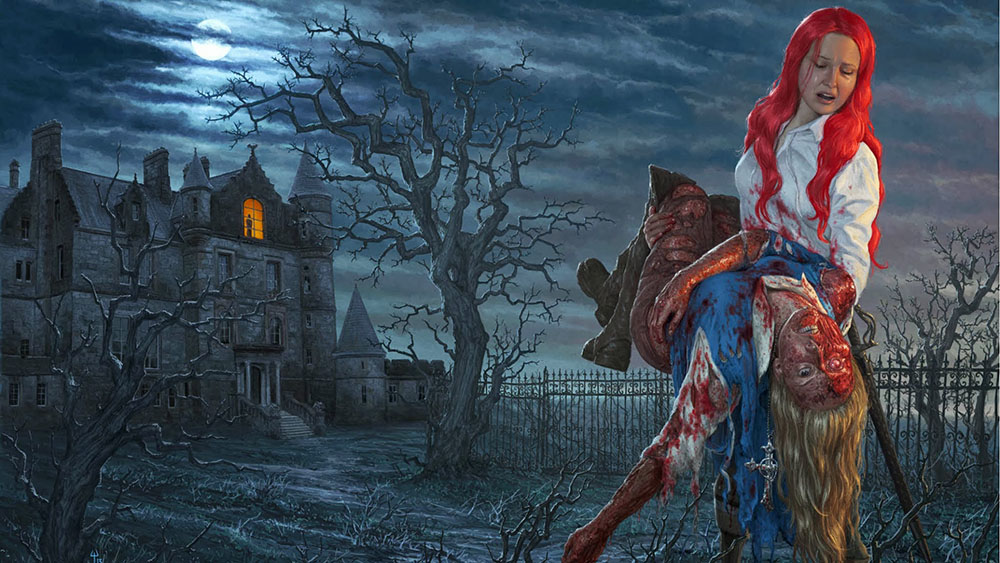 Recently I picked up the new hardcover version of Lamentation of the Flame Princess’ Rules and Magic book. Even though I have read the rules several times over the last few years, I took the opportunity to give it another look. I have stated several times before that LotFP is one of my favorite D&D retro clones, and today I want to share my reasons with you.

Weird Fantasy
LotFP is advertised as “weird fantasy”. But what the heck is weird fantasy about? Basically it’s fantasy combined with elements of horror. If you ever read one of Robert E. Howard’s Solomon Kane stories you get a good idea of what to expect from LotFP, especially if you set your game into an early modern age. The hardcover edition actually includes rules for early firearms and armor used in that period. LotFP gives me a similar vibe as the old Warhammer Fantasy Roleplay 1st Edition.

Low or rather less flashy magic
The magic in LotFP feels a bit different from vanilla D&D. A lot of the spells are less flashy and overall magic feels more like a dark art performed by a few instead of something which is present on every corner. Summoning is a dangerous affair. If you mess up, the thing you just summoned into the world, rips of your arms and legs and returns to hell with your soul in tow. Ouch! In LotFP magic is dangerous and mysterious. If you’re fed up with standard high fantasy settings this is a very welcome change.

Skill system
Most D&D retro clones (and early editions of D&D for that matter) use skills for the Thief class only and use a percentile-based system which doesn’t really fit in with the other mechanics (at least in my opinion). James Raggi IV has taken the system, turned it into a d6-based one and applied it to all the classes. Now every character has a certain chance to Tinker, Climb, find secret doors, etc. but only the Specialist class may improve these skills. This makes a lot of sense to me and it seems to work quite well.

No superpowered heroes
In vanilla D&D characters become extremely powerful over time. And to counter that the GM has to come up with more and more powerful enemies every time. The high availability of magic weapons and armor only makes things worse. In LotFP characters don’t improve that fast. The fighter is the only class which improves its base attack bonus over time and magic items are extremely rare and always come with a cost. But this also means that monsters don’t need to have ridiculous stats in order to be any challenge. The way LotFP is designed, even a high level character is in danger when confronted with too many enemies – even low level ones.

Different but still familiar
Even though LotFP feels different from other D&D retro clones it’s still familiar. If you have played any D&D-based game you can easily pick up and play LotFP. Adventures designed for other D&D variants can easily be modified to be run with it.

Conclusion
Lamentations of the Flame Princess is perfectly suited for any game set into a pseudo-European early modern age game with low magic and horror elements. Would I run a Forgotten Realms game with it? No way! What about Ravenloft? Hell yeah! I’ve also considered using LotFP for a game set into the Warhammer world. Or you could probably just as easily use it for a game set into the aftermath of the Thirty Years War. In my opinion LotFP is more than “just” a D&D clone, but a game which harkens back to the days of yore while taking things into a fresh and new direction!

What’s going on at the RPMN?