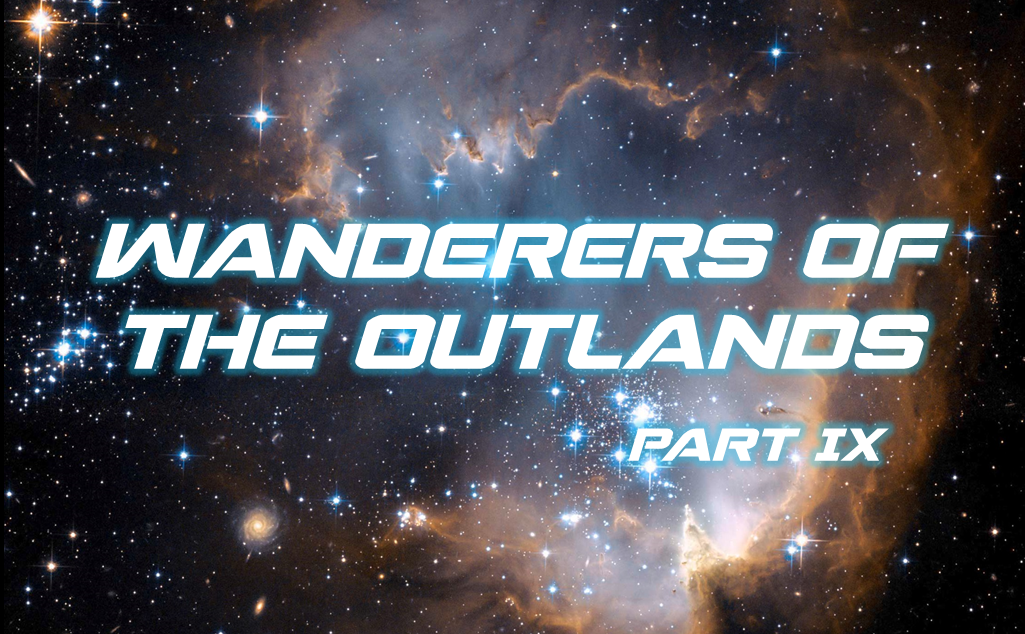 I have officially reached my mark! My last weekly series of posts about my Star Wars Infinities campaign lasted exactly nine weeks. It seems like it takes sci-fi to get me writing regularly! Sort of appropriate for a blog called Stargazer’s World, but I digress. Like I said last week, we are going for a longer run. Be back next week for part X.

Just in case this is the first of these you read, quick recap… This weekly series covers the background to a sci-fi campaign I’ve been planning for a couple of years, and which is about to begin with my weekly game. Here’s the link to last week’s post, Part VIII. If you have any comments, questions or suggestions feel free to leave them in the comments!

Most old Earth religions still exist in the known galaxy. Many have evolved and changed as humanity travelled the stars. The Catholic Church went through a profound changed as it expanded into the known galaxy. After a profound process of reformation the Catholic Church is currently a very liberal institution, concerned with the causes and needs of the poor and disenfranchised. Women are ordained, priests and priestesses can marry, monks and nuns are missionaries and social activists, even members of other species have been ordained into the priesthood. During this process of change, also known as the Stellar Reformation, many Christian denominations long estranged from the Catholic Church rejoined the institution, so many cardinals and archbishops follow old Earth traditions taken from Baptist, Presbyterian and other denominations.

Before the Great Galactic War, the Papacy existed as a stellar nation but they joined the Union during the unification campaign. Their current leader, Pope Nneka Ferreira, a female pope, leads the faithful as a first among equals with the Council of Cardinals. The Catholic Church joined with two other faith-based stellar nations, the Islamic Caliphates and the Planets of Chadash Yisra’el, to form the Judeo-Christian-Islamic League, also known as the Abrahamic League. Whereas the Christians are as a typically more liberal, the Caliphates are more moderate in their political views, and the Jewish planets are the most conservative members of the block.

Many religious movements and beliefs have emerged since humanity took to the stars. Some are small fringe groups, others as large and important as the old religions. Two are break away movements based upon old Earth beliefs and classified as the Neo-Evangelical movements. One group is known as the Children of the Galaxy. They believe that the Ancients, whose ruins are found in many planets across known space, were the basis for many human and alien myths. They believe these Ancients visited primitive humans in old Earth and influenced their development, despite no scientific evidence to back up this claim. The Children of the Galaxy trace their traditions to Hubbard, Applewhite and Caladonzo, whom they consider their old Earth prophets. They have created a very inclusive religious group, whose rituals and traditions are constantly evolving due to the relative newness of the faith.

The other Neo-Evangelical movement is the Human Hegemony, or HH. They believe in that humans were created in the image of a supreme god, that old Earth is the pinnacle of his creation, and that humans are destined to rule over the entire galaxy. They believe all other faiths are the corrupting influence of an evil entity, the adversary to the supreme god, and that other species in the galaxy are inherently inferior. They deny all facts that contradict their beliefs, disregard the opinions of non- believers as unimportant and consider their holy texts as the irrefutable truth and the definite will of the supreme god. Human Hegemonists were heavily influenced by Crypto-Apocalyptic Evangelical Christians of old Earth, but include elements of Neo-Orthodox Judaism, Old Way Muslims and Zoroastrianism.  They are a vocal minority in the Phalanx stellar nation, but are generally derided in the greater Union. They have been known to engage in criminal, even terrorist, activities when attempting to impose their belief system on others.

Shinto, Buddhism and the Islamic traditions of the Muslim Reformation are also well represented among the religious in the Union. The Rastafari Movement is a large and inclusive philosophy with many followers. Most human religions of old Earth have a temple or some followers in the Union, perhaps only a handful, but they exist. However, people that identify themselves as religious are a minority in the Union. According to the first Union-wide census about 30% of the population identified themselves as members of a specific religion, the number being significantly higher in the Judeo-Christian-Islamic League and the Phalanx. The rest of the population identified itself as agnostic or atheist.

Through humanity’s expansion into the galaxy, many new reckonings have been proposed and established. None have survived very long. Early in mankind’s diaspora to the stars many settlers began new calendars based on important dates such as the establishment of a colony, but the reckoning was only meaningful to locals and its usage confusing to outsiders. The TCGT Courier System continued using the old Earth Gregorian Calendar, also known as the Modern Era reckoning, or ME, common in the Eire-Indo-Nippon Block and the American Alliance. The usage by the TCGT meant that it remained the standard all across the known galaxy and most new reckonings were abandoned in favor of a common timekeeping convention.

All other alien species have their own time keeping conventions, most have a standard used in all their colonies, but most that have prolonged contact with humans have adapted and converted their calendars to the human standard.

The length of a planet’s rotation around its star, or stars, varies depending on its position relevant to the main astral body, gravitic variations and other factors, meaning that there is no standard duration of the day anywhere in the Union. Most settlements adapt their work cycles to the reality of the planet, but just like the old Earth calendar stuck around long after the majority of humanity left their birthplace behind, so has the concept of the 24 hour day.

Despite the existence of more efficient systems, shifts and schedules aboard starships are organized following the 24 hour day convention, with a 12 hour day cycle and a 12 hour night cycle, just as it was in old Earth. Most space stations and governments, including the Union, follow a similar pattern, regardless of the real length of rotation, day and night of the planets where they are based.

The Union Council established a new calendar reckoning, officially replacing the Modern Era reckoning, with the end of the Great Galactic War and the signing of the armistice marking the end of year 0 and the official establishment of the Union reckoning as the beginning of year 1 on the Union Calendar. Despite reluctance from TCGT the Union pressured them into accepting the new UC reckoning and it has become the standard all across the know galaxy. Will it survive or suffer the fate of similar calendar innovations? Only time will tell.

That’s it for now… Next week, some other general details about the campaign! See you then.