The next to last post for #RPGaDay2015, I’m already sad it’s ending; hopefully we can do this again in 2016. Here’s the final Sunday post…

My favorite RPG playing celebrity is Mark Sinclair, aka Vin Diesel! Let me tell you why. He is a very well know celebrity, open and honest about his love for D&D, while at the same time being very guarded about his private life. 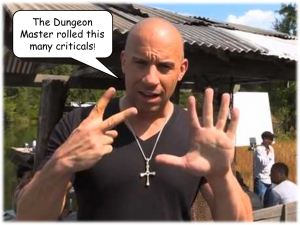 I am thrilled that fantasy, gaming, out hobby has gone mainstream and among the current generation there is no stigma to playing RPGs. I never experienced any negative effect for my love of gaming, but while I was growing up RPGs carried some stigma, you still run into some of it with people in my age group or older, you even encounter the “gaming is for children, grown-ups don’t play games” or “it’s not cool!” arguments now and then. While I don’t feel the need to justify my likes or hobbies, there are people out there who are swayed when you mention some famous person they know plays D&D, and it changes their perspective. Silly, I know, but it happens!

I’m very open about my love for RPGs, back when I was single I would mention I was a role-player on a first date, letting them know what they were getting into. I rarely had a negative reaction, and when I did, I had Vie Diesel as my back up, “He plays D&D you know…” I might not have asked her out on a second date, but I always had Vin! Jejejeje

Who’s your favorite RPG playing celebrity? Let me us know in the comments. See you all tomorrow for the final post on this series!