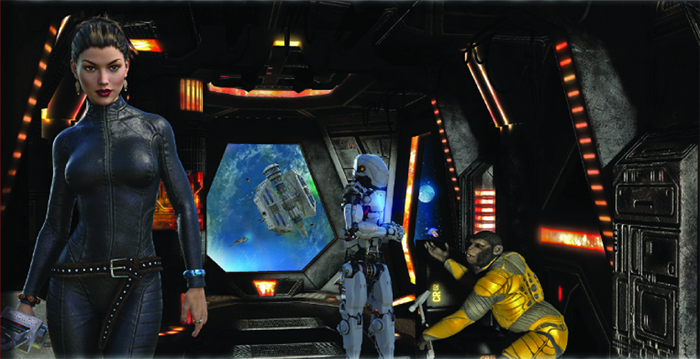 Michael has already shed some light on the various incarnations of the Traveller rules. The sheer number of different versions can be somewhat overwhelming.
But once you settled for a given ruleset you face an even more daunting task: making yourself and your players familiar with the vast setting of Traveller.
To my experience this is one possible point of failure when the scope of the setting encounters the expecations of the players for the first time.

The official Traveller universe
The official “Third Imperium” setting for Traveller encompasses 11000 star systems, at least six major polities and a plethora of human and alien cultures. Most of those features are deeply rooted in classical science fiction literature of the 60ies to 80ies – but where this might be very rewarding to me – a SciFi nut for more than forty years – there is little to nothing to relate to for a younger prospective player.

Neither Star Wars features strongly in the original Traveller setting nor does Star Trek and those are probably the most popular SciFi franchises around. And who even remembers Firefly or Battlestar Galactica any more? Coming from the “mainstream of pop culture” the sheer bulk of background “stuff” of the Original Traveller Universe (OTU) without easily recognizable features like a mystical knightly order or a benevolent planetary federation often leads to dismissive reactions (tl;dr).

So how to make this game your own?
There is – as always – more than one answer to this question.
Michael asked me to take a look into a couple of Third Party Settings but there are also a couple of DIY approaches like “Proto-Traveller” (Michael already mentioned it before) to adapt Traveller for your own science fiction gaming needs.

The Traveller rules where originally meant to be generic RPG rules for contemporary or futuristic settings and Mongoose themselves willingly provided a handful.

One of the more successful attempts was 2300 AD (meaning it is still around in 2016) which is probably sufficiently known. But since 2300 AD is Mongoose’s in-house Alternate Traveller Universe (ATU) setting these days I won’t cover it here.

As mentioned above there are also a couple of DIY methods but those were not part of Michael’s request und would be beyond the scope of this post.
Then there are those by third party publishers (3PP) like Spica Publishing (Outer Veil), Terra/Sol Games (Twilight Sector), Zozer Games (Orbital 2100) and Gypsy Knights Games (Clement Sector).
This list is neither representative nor complete those are merely the settings that caught my eye one way or another while I was looking for something new since the Spinward Marches and the Solomani Rim as well as the classic era had somehow lost their appeal.

Except for Twilight Sector they all have in common that they are well below the techological level of the “Third Imperium” setting, that there are no (playable) aliens and that Earth and its neighbourhood feature more prominently.

Twilight Sector
Twilight Sector has a distinct feel of Transhumanism to it – PCs are either natural mutants (NMs) or genetically enhanced/modified humans (SIMs). That and the somehow surreal background – Earth is gone but there is a really good copy of it – drove me away from it. It is also the most technologically divergent 3PP setting I am aware of. The playstyle seems to focus on freelancers and explorers for hire in a gritty borderland region after a major conflict.

The setting’s worlds are properly described with emphasize on the main worlds but beyond the borders the map turns up blank which means the Referee has to create new challenges. A star atlas remedies this lack of information somewhat but only superficially.
The setting provides a free introductory solo adventure and a free mini campaign complete with audio files for enhanced game experience.

Twilight Sector also provides a couple of starship and technology books as well as a campaign book.
I am reluctant to evaluate the quality of the entire setting since I never went beyond the two gunbooks (Laser and Gauss Weapons which I can recommend wholeheartedly) and a couple of freebies since the basic asumptions (all SCs are Mutants, everything looks somewhat bleak) didn’t appeal to me. But apart from the gimmicks which are presented appealing and well structured there seems to be a lot of work in stall for the Referee allowing for great customization but requiring plenty of time. As of now Twilight Sector is tailored to the Mongoose Traveller first editon (MgT1) rules set and I have no knowledge whether that will change.

Orbital 2100
Orbital 2100 by Zozer Games is a rather low-tech (TL 9), hard-science fiction setting depicting a beginnig 22nd century in our own solar system. It is featured in this overview mainly because of the success of “The Expanse” TV show on SyFy and because proper “low-tech” settings are rare.
Up to “The Expanse” I barely thought about playing in our solar system and I still can’t imagine how to convince my gaming group to join me.
The voluminous setting book encompasses a carefully developed timeline, governments, factions, equipment lists, a comprehensive write up of the solar system, design sequences for launch vehicles and deep space craft and most importantly a customized character generation system.
All that is needed is in this book, the scope of the setting by far less intimidating than the OTU. If you are interested in a more hard-science fiction style of play – this is probably worth a go.
Zozer Games recently updated Orbital 2100 to account for the their decision to support the OGL versions of Traveller: Cepheus Engine (CE) or MgT1 respectively.

Outer Veil
Outer Veil by Spica Publishing takes us to the middle of the 22nd century and back into interstellar space. Humans discovered some sort of FTL device enabling them to travel to the stars bringing their hopes, dreams just as well as their conflicts and problems with them. In some aspetcs Outer Veil reminds somewhat of 2300 AD light with a conventional jump drive. Every world beyond Medea (the first colony in the Alpha Centauri sytem) has to be considered a frontier world. International corporations wield at least as much power as governments do and often more.
The setting conveys a mixed atmosphere of Wild Frontier and Cyberpunk offering itself for Firefly-like adventures.
Many of the star systems depicted on the various maps remain unexplored leaving plenty of space for gaming groups to discover. Sentient life is yet unknown but ruins and artifacts clearly show that there are or at least have been star faring aliens.
The writeups for key systems could be considered a bit too concise. But this might also be a chance for the enterprising, individualistic GM to leave his or her mark on the setting.
A selection of starships provides transportation for the PCs and their opponents. They fit the “low-tech” profile (TL 9-11) of the setting yet their aesthetics remains debatable.
the chapter on character creation expands and modifys the basic system from MgT1 to be more suitable for the Outer Veil.
Last but not least the setting book offers a selection of patrons (contacts, potential employers or enemies), other NPCs and organizations as well as an introductory adventure.
Besides a variety of adventures, career books and so on Spica Publishing also offers an entire, free campaign “Though the Veil” consisting of 10 linked adventure scenarios .
If you don’t shun some work, would like to shape your own TU and like “Frontiersman” style adventures you might give Outer Veil a try.

Clement Sector
The next and – for the time being – last alternative setting for Traveller is Gypsy Knights Games’ (GKG) “Clement Sector”.
I kept it until the end since it is in some aspects different from the others discussed.
There is for instance the sheer amount of material GKG already created for their “little corner” of the Milky Way: more than 40 sourcebooks, adventures, game aids, subsector books and shipbooks up to now. And they keep it coming – the sixteenth shipbook is scheduled for release for the latter third of November.
Another aspect is the sense of familiarity Clement Sector provides – humankind spread over dozens of worlds and yet they still bicker and fight just like today.

New nations appeared, old ones reformed but still they are human – the potential is at your disposal. In fact I had to tell a couple of my players that I wasn’t ready to run a Clement Sector-based Traveller campaign because it felt “too close to home” for me.

Thousands of lightyears from Earth and until “recently” connected to Earth’s interstellar neighbourhood by some sort of wormhole Clement Sector attracted plenty of settlers from all over Earth and its older colonies. They made new homes which grew or even flourished. Then the wormhole collapsed, severing any connection to Earth thus creating a sandbox for the enterprising Referee.
And only a fraction of the sector is explored. The current premise of GKG is that there are no (recent) sentient aliens whilst alien life exists in abundance.

An exception to this rule exists with a variety of uplifted animals either from Earth (Apes, Bears, Dolphins etc.) and from Clement Sector worlds (Kraken and Yeti). There also genetically modified humans called Altrants. They can provide for the sense of wonder or strangeness you might miss, I suppose.
Bottomline – the Clement Sector setting provides the most extensive and elaborate ATU I am currently aware of. It offers readily useable materials with its subsectors, shipbooks and plotbooks yet there is plenty of space for your own developments. And still there is more – and that is the other, perhaps the main reason why Clement Sector is different from the other settings.

As Michael mentioned in his last two Traveller posts Mongoose Publishing decided to ablish its OGL policy. For Gypsy Knight Games this became a real game changer. The new Traveller Aids Society program would have meant the loss of intellctual property on every last bit published under its tutelage as well as a reduction of returns. This would have been a desaster.
So they pulled out. First they revamped their entire product line to conform to the OGL version aka the Traveller OGL System Reference Document but then some big opportunity presented itself… Samaradan Press released the Cepheus Engine.
Instead of revamping once again GKG decided to make the big jump and adopted the Cepheus Engine to their setting and published their own rulebook.

Except for Psionics (which don’t exist in the setting), dedicated rules for alien species and ship building rules (there already was a setting specific book avaliable) this volume contains anything you need to play.
From a cost-value perspective you could purchase the rule book, the setting book and even “Anderson & Felix Guide to Naval Architecture” (the aforementioned contender to Mongoose’s “High Guard”) as well as the Cepheus Engine SRD (to fill any gaps) and still save some money.
You just don’t get the full colour stuff of MgT2. If this is important for you should turn to Mongoose’s line of products.
Hence, one may conclude hat there are plenty of alternatives to the Original Traveller Universe.

There are even some more, detailing Far Future Enterprises’ “Referee’s Preserve” in Foreven Sector (see Jon Brazer Enterprises “Foreven Worlds” oder DSL Ironworks “The Bastards of Foreven”, currently under rerview). You will still have to look around for what suits your style of play best and as always make the setting your own.

May your travels be exciting!

Helge is just an ordinary guy with a slightly obsessive dedication for Traveller in many of its variations.