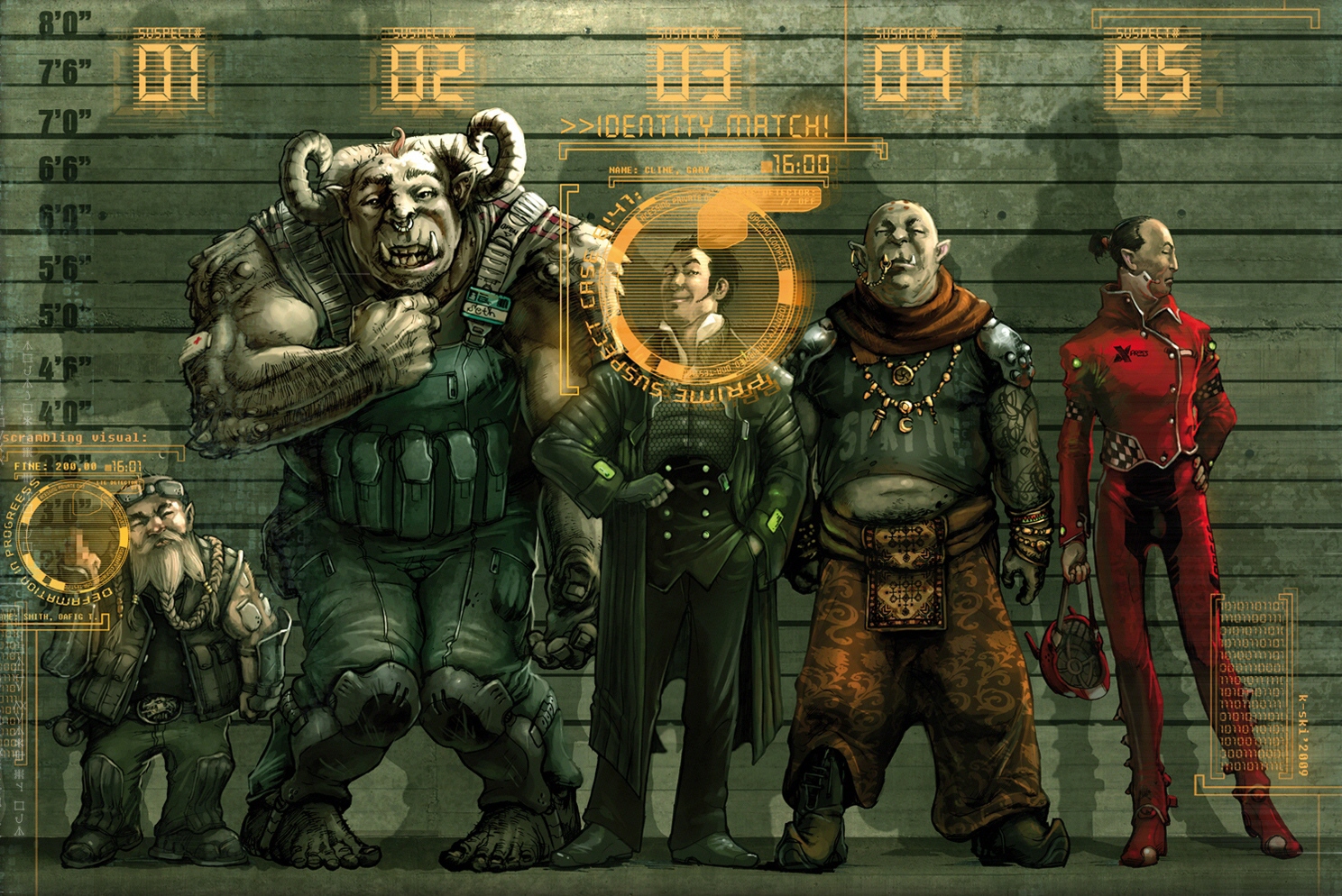 I had already picked the Contact Brief “Company Town” and decided that I wanted to run the game in a more traditional way. Shadowrun Anarchy also allows Shared Narration, but I thought for a group of six people with mixed knowledge of the setting, running it traditionally with a strong GM was easier. I also have to admit that I am not fully comfortable with Shared Narration yet, but I intend to give it a try in the future – but with a smaller group.

The adventure starts at the Space Needle in Seattle. After being checked for weapons the Shadowrunners were lead to the Mr. Johnson which already had rented a private room at the Eye of the Needle restaurant. The Mr. Johnson turned out to be an attractive thirty-something human female who immediately talked business. Their job was to get the access information from people working at three different Ares subsidiaries located in Detroit: Cross Global Development, Gavilan Ventures, and the mysterious Project Avalon.

The Contact Briefs don’t give a lot of information and so the players and the GM are forced to be creative. Since I have played Shadowrun for years I quickly had some ideas how the three buildings they had to get access to looked like and what security they had to overcome. Basically they either could try to get the information they needed by hacking into the buildings’ servers or they could obtain it directly from the people working there.

The player characters started by observing their targets for about 24 hours. They also accessed the Matrix to get information about each building and the corporations housed within. With a bit of luck and some brute force hacking they also got their hands on the blueprints of the GDC and Gavilan Ventures buildings. No information could be found concerning Project Avalon. They also noticed that Gavilan Ventures had a job opening for a secretary.

After a very long discussion about how they could infiltrate each building without alerting anyone, they came up with three pretty clever plans. In the case of CGD they had to get an employee’s retina and fingerprint scans. So they followed one of the employees to his home and Sledge caused a traffic accident by ramming the poor guy with his heavy motorcycle. The group’s medic Wagon immediately rushed to the injured wage slave, applied first aid and obtained his retina and fingerprint scans while doing so.

In the case of Gavilan Ventures a personal access code and an RFID tag was needed. Unfortunately they quickly realized that these chips were implanted. So Gentry contacted his contacts to get his hands on both a small IR camera and a portable RFID scanner. Then he applied for the open job using a fake ID. Luckily he was invited for an interview and was able to scan and copy the RFID chip of the Human Resources employee who interviewed him. He also managed to get a good luck at the same guy entering his access code. Again getting the needed information was a cakewalk. 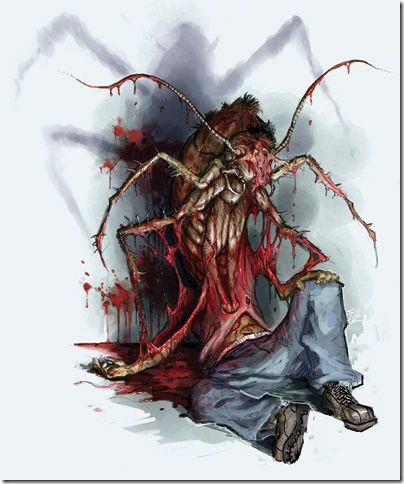 Project Avalon was a more tough nut to crack. The Contact Brief mentions that the facility is abandoned and some kind of weapons research was done there. It also states that the facility had been shut down without removing anything from it. In our game last night the site consisted of several smaller buildings on a large area surrounded by a high fence and controlled by two watchmen and two dogs. The whole place looks abandoned and security seems to be pretty lax.

But this is just a front. The real action happened undergroud where Ares obviously experimented with Bug Spirits and weapons capable of harming them (and other spirits). Unfortunately some of the bugs escaped their holding cells and killed dozens of employees and in the end Ares just shut down the facility and made sure the bugs couldn’t escape.

Getting onto the grounds was easy. Razzle Dazzle used her invisibility spell on the group, while her cat mentor spirit distracted the guard dogs. In the meantime Thunder carefully picked the locks. Quickly they found the underground facilities and a quick look into astral space revealed that something terrible must have happened at this place. The whole place looked sick and the spirits of the killed employees still haunted the building. Then they were ambushed by a pair of Bug Spirits which were dealt with swiftly. Luckily none of the characters was harmed because Thunder was able to summon a spirit which protected them while their combined firepower was enough to put both Bug Spirits down.

Two floors down they were finally able to turn power back on an Gentry immediately accessed the facilites’ servers. After a short cybercombat against some ICE, he was able to download some paydata in addition to the information they were looking for. They also found a couple of prototype rifles which were designed to harm spirits, which they took with them in case of another ambush.

Getting out of the facility was easy, since they carefully avoided any Bug Spirits which might still roam the facility. Instead of staying another night in Detroit the group decided to return to Seattle immediately. At the airport in Seattle Mr. Johnson was already waiting for them in a large black limousine and handed them the 6 Karma (in-game we actually used 10,000 Nuyen per Karma) as promised. The End…

Shadowrun Anarchy is definitely a bit rough around the edges, but it was a lot of fun. Even players who were a bit skeptical if Shadowrun was for them, enjoyed it tremendously. One player told me she especially enjoyed the planning phase were the group thought about the various ways they could get the hand on the information needed. The rules are so light that they seldom get in the way. There were a couple of cases where I had to look up rules in the book, but that’s mostly because we played it for the first time.

What got old pretty quickly was that every test is supposed to be an opposed test in SR:A. If a lock is very easy to pick, the GM rolls four dice and the successes rolled are the number of successes the player has to beat with their Lockpicking roll. This doesn’t add to the drama but just slows the game down. After our dinner break I only rolled during combat, but outside combat I just told the players the numbers of successes they needed to succeed in a task. Everyone agreed that this method was much better.

This time we also rolled for initiative as proposed in the rules, but I think next time I will choose a more cinematic and freeform approach to initiative. I noticed that players didn’t use Plot Points that much, but Edge was used regularly. Especially Wagon’s ability to share his Edge points with his comrades was quite handy. I think that the more traditional game mode might need more uses for Plot Points or I should give the players more hints on when to make use of these points in the future. 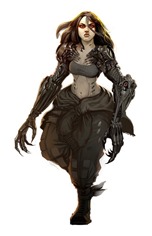 The big question is “Did it feel like Shadowrun”? Hell yeah, it did! SR:A definitely feels like a Shadowrun game even if it uses much simpler rules. I also love the Shadow Amps concept because it allows players and GMs to easily create custom spells, cyberware etc. without breaking the game. A perfect example are Kix’ custom cyberarms. I am also pretty sure you could easily create a character like Glory from the Shadowrun Dragonfall computer game with SR:A.  Of course combat is way less tactical and involved than in regular Shadowrun, but I think it depends a lot on the enemies and the situation.

I got a lot of positive feedback from the players and we decided to keep playing SR:A regularly. We will probably squeeze it in between our Star Trek playtest session. If you have any further questions about Shadowrun: Anarchy and our first session, please comment below!

Not excited about D&D Next? Then check out these cool alternatives…