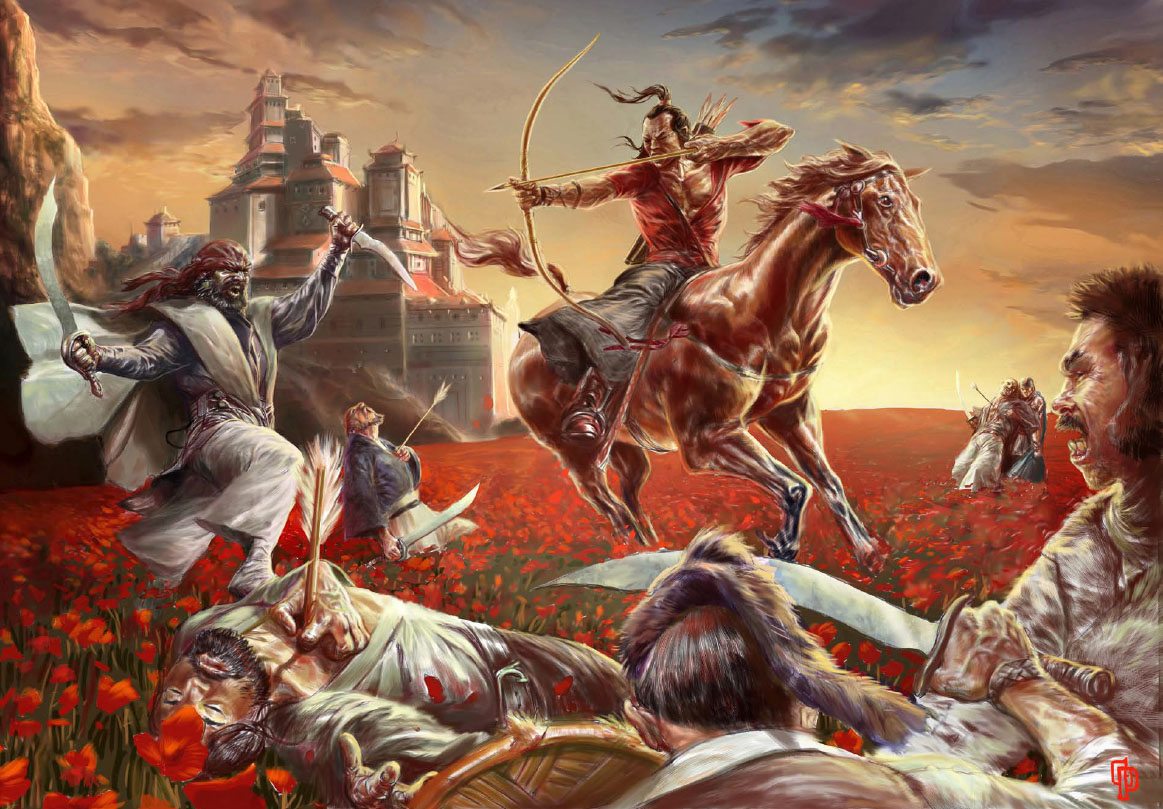 I have based this look at the Conan rpg on the quick start rules and the Conan Free RPG Day 2017 version Pit of Kutallu.

When Michael reviewed the full rule book the overall impression I came away with was ambivalence towards the game but then Michael is not a real Conan fan. Conan was my way into RPGs in the first place.

So putting the 2d20 system aside (more about that later) how has Conan and Hyboria been treated? With the greatest respect is my impression. The books are littered with vignettes taken from Robert E. Howards original works and these set the scene and bring the setting to live. The quick start book even starts with an essay on what is canon and who Howard’s creation was taken and expanded upon.

I have read through two adventures; Pit of Kutallu, which showcases the dark Cthulhu-esque shared background of Hyboria and To Race The Thunder which is set on the very edges of Aquilonia.

I may be somewhat biased here but these adventures are written in the same style as I tend to write my own. I am not a lover of maps and room by room descriptions. These adventures describe challenges or encounters and the GM may use or ignore them as they see fit or are needed to challenge the players. There is another quality to them and this is ‘relative encounters’.

In many classic published adventures; a location will be described and then you are told there are 5 guards stationed here, what they are carrying and any treasure. When the PCs roll up they meet or avoid the guards depend on their choices. These static encounters have the danger of being over powered or under powered depending on the make up of the party. We play a game based upon dice and random things happen.

Another feature, this may just be because the sample I have looked at are intended to be single shot adventures, but NPCs are designated as being suitable for use as PCs. Should a player die in the game session they can take up the reins of one of these NPCs to complete the adventure. This points to the adventure being well written. It also gives the GM a free hand relating to danger. I am not a ‘killing’ GM. I do not go out of my way to stack dangers against the PCs. At the same time I like to let the dice fall where they may. I am running a game set in the Forgotten Realms right now and the party have two possible options for raising a fallen character, both of which are single use, one is a scroll and the other will be consumed when used. Giving them that ability means that my hands are free to play my monsters and NPC opponents to the best of their ability. Seeding the adventures with potential pregen characters also frees up the GM.

So, as published Conan is a 2d20 system but Modiphius also publish a d20 to 2d20 conversion document to help those moving from the Mongoose Conan game. WotC incidentally publish a D6 to d20 conversion guidelines document relating to the StarWars franchise. This means that junking the 2d20 system, the only element that I don’t like, and adopting either d20 or an OpenD6 system are viable options. My D6 bookshelf has grown to 5 books now and I like what I am reading.

So will I buy Conan: Adventures in an Age Undreamed Of core book? It is a relatively cheap book and certainly good value for money at nearly 500 pages. I think this is a good possibility and kills two birds with one stone, to use the cliché, I could tempt my main group of players with Conan and feed them the D6 system at the same time. So right now Conan is on my ‘I want to play’ pile.

Rise of the Eurogame