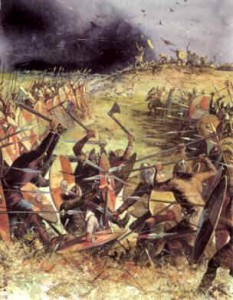 War is a sad constant in human history. So it isn’t surprising that war is a popular feature of literature and it plays a major role in most fantasy campaigns. But how do you include war in your campaign? What are the different methods you can use and how can your players still feel in charge of their characters’ decisions with a war raging around them?

Start small
Of course there are a lot of ways you can introduce war to your campaign. In some campaigns war started long before the player characters arrived on the scene. In those campaigns the war is already part of the setting and players (and their characters) are actually prepared. But I like to start things small. At the start of the campaign there’s still peace (perhaps an uneasy one). Step by step you can now make the transition from peace to all-out war.
At the beginning it’s just rumors, especially when you are far away from where the actual battles are. People talk about armies roaming the countryside, skirmishes at the border and the common folk gets increasingly wary about strangers (like the adventurers).
During the next phase make use of encounters with  refugees. The first refugees still have almost all of their possession and they left because they heard of enemy armies approaching their city/town/village/whatever. They haven’t seen actual battle and they can only share more rumors. As the war grows nearer the refugees’ knowledge of what really goes on increases while the things they could take with them decreases. Slowly built up an atmosphere of dread and anticipation.
When your player characters encounter the enemy for the first time, it should be sudden and very dramatic. Imagine that the party has been travelling on a deserted road for quite some time believing the war is still far away, when suddenly an army marches over a nearby hilltop. Or they are ambushed by a scouting party. Another possibility is that they are stopped by a drafting party that want to enlist them into the local militia or even the king’s army.
As long as it’s dramatic and hasn’t been anticipated by your players everything is fine.

You’re in the army now
Ok, your players have been drafted or they volunteered to defend the locals against the encroaching enemy troops. What to do now? If the characters are still of low-level you can get away by putting them into an army regiment and order them around a bit. But don’t put too much pressure on them. In the end the players should be the ones who decide what to do, never the GM via NPCs. Usually things work out great when you give the players some special assignments like reconnaisance or diplomatic mission.
If the system you are using allows it, you may grant the party some combat training. Take “Warhammer Fantasy Roleplay” for example. If one of your players wanted to take a military career for his or her character he or she now has a chance to change careers. Or if the player needs a teacher to learn a certain skill, there’s probably someone around who can team him (when the skill is related to warfare).
Having the party recruited into an army gives a lot of opportunities for non-standard adventures, especially when they do not shy away from combat.

Into battle!
Battlefields are a dangerous and chaotic enviroment. If war is a major feature of your campaign your characters will probably see a lot of action in skirmishes or even large-scale battles.  But running large detailed battles can get boring and very time consuming when you do it “by foot”. If your players have a knack for strategy you could think about giving each of them a platoon (or even a larger military unit) to control and play it out like a tactical wargame. There are a lot of different mass-combat systems out there that allow you to do just that.
Another possibility is just to focus on the player characters. Let the players actions and the outcomes of fights against single, powerful enemies change the course of the battle. In a game a friend of mine ran some years ago, we fought in a massive battle against thousands of orcs. But of course we only “fought out” the more interesting combats like against the Orc general and his bodyguards. The rest of the battle was not played out but the GM gave us a narration of the events. So the spotlight was on the characters at all time and the rest of the battle served as “backdrop”.

Revolution!
Another alternative is a revolution or an uprising. Imagine a country where a tyrant rules with an iron fist. How would your party of goody-two-shoes adventurers react on this? Helping the locals with their plight might even lead to an uprising where the characters are at the front of every battle against a tyrannical regime. And what happens when the locals want to make the PCs their new leaders?

Source of inspirations
If you want to feature war in your fantasy campaign it’s always a good idea to do some research first. History books are a great resource since there were a lot of wars in our history. If you aren’t into reading watch some documentaries on History Channel or watch movies about war. And don’t forget that nobody wages war just for war’s sake. What caused the war? What do the warring factions want to achieve. What do they tell the common people the cause is? And what’s the real cause? And if you are really into such things, check your local library for books like Sun Tzu’s Art of War or more modern treatises of this subject.

War can be a very interesting element in any fantasy RPG campaign. It allows the GM to make some geopolitical changes to his campaign world (like destroying or conquering entire countries) or just give the party some opportunity to hone their combat and leadership skills. But one thing is sure: if you do it right, it can be a lot of fun and your party has a lot of opportunity for heroics. And that’s what fantasy roleplaying is about (aside from the loot, of course)!

Note:  This is my contribution to this month’s blog carnival hosted by “The Book of Rev”.