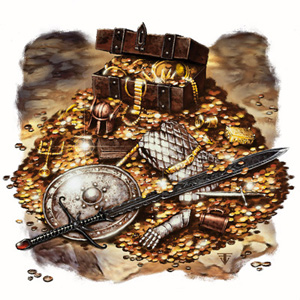 Over on my own blog, Exchange of Realities, I’ve been working on advice for creation, personality, interaction and plot hazards of intelligent magic items. But it can be hard to make a magic item from whole cloth, so I’m here to give some sample magic items. (Note: These are unstatted so as to be adjusted to any sort of game or power level, and designed as detailed enough to be useful and interesting but not so strong they break the game.)

Zuhayr, the Mirror Blade: This sword boasts an impossibly smooth blade and a jeweled hilt. He is exceptional at predicting his wielder’s foe’s movements, and both can and will provide fashion and presentation advice for his wielder in his cheerful telepathic “voice”. On the other hand, he is resistant to parrying attacks from stone or metal weapons until the first time he does so successfully. This is a matter of history; Zuhayr was originally designed as a magic mirror, made to help people identify and change their personal reflexes. Unfortunately, a rather too helpful apprentice applied the spell for increased reflectiveness to the mirror before it had been enchanted for personality or powers, and the imbuement spell bounced off the mirror and hit a well-decorated sword not too far away. As a result of his original purpose, Zuhayr thinks like a mirror when he perceives himself to be in danger; that’s why he needs to remember or be reminded that hard weapons won’t shatter him.

Vigilance: Vigilance is a long jacket with intricately embroidered trim in a ‘creatures peering out of tangled branches’ motif and a pair of matching elbow-length gloves. It was designed to defend its owner against assassination, created with keen senses and a sharp social intuition to avert the threats before they could occur, and magically reinforced material and a minor deflection effect in case someone gets past it and attempts an attack. Vigilance is fond of political games and social infighting, and considers itself an expert in search of a partner; with a wearer who has the same skills and inclinations, it will plot as well as protect, communicating telepathically with its owner. But Vigilance does not suffer fools or incompetents gladly; those who don’t listen to it, or those with no skill in the social world and no desire to learn, it protects by taking control of them, knocking over poisoned wineglasses or directly smacking potential assailants with concealed knives. With any luck, it hopes, this will drive the wearer from the courts, and allow Vigilance to be handed off to someone with a bit more refinement.

Iola: This foot-long plume pen is a brilliant scarlet in color. Though it does not improve its owner’s capabilities directly, it will edit passages they have already written, self-animating and leaving marks and alterations in a deep crimson almost dark enough to be black. Her intelligence was discovered when a writer wrote questions in the margin in response to her alterations, resulting in a long conversation. Asking (though it must be grammatically; Iola is often distracted by the need to fix errors) will tell the curious that Iola was once a critic of great renown, specializing in military histories. She met her death at the end of her own signature white plume, stabbed to the heart by a warrior-poet offended by one of her reviews, but was too stubborn to die; as her blood stained the plume red, her spirit traveled into it as well. Needless to say, Iola seeks to rid the world of bad writing.

Kestrel: This short composite bow, made of the red wood of the manzanita, is strung with a strange silver wire that never breaks. She speaks through vibrating her string, usually in a rather put-upon tone. Kestrel’s powers are all based on the destruction of demons, and she thinks of very little else; while she can tell you a lot about her prior experiences in battle with the fiendish foe, and will unbend enough to chat about matters of her own care and the proper treatment of arrows, history and trivia questions will as often as not by replied to with an aggrieved “I’m a demon hunter, not a [profession appropriate to the question]!”

The Shield of Syrim: Though highly intelligent, this ornate shield communicates only in mental images and dreams. Its main power is the absorption of energy-based attacks, and the redirection of that energy to healing its wielder. Owners of the shield have been known to experience nightmares about burning from the inside, most commonly after battles in which the Shield’s power was used frequently; it’s unclear whether this is a hint at the Shield’s history or just a complaint about its circumstances.

What do you think? Got any details to suggest or items to add?

Ask The Readers: Have you played Arcane Heroes?