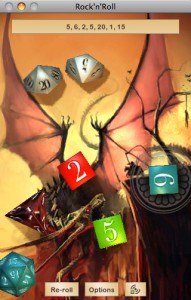 Last year I posted about MachDice, a dice-rolling tool for the iPhone. Today I stumbled upon a similar tool for Windows or OSX called “Rock’n’Roll“. This nice looking program was created by Mad Ogre Games and has the following features (I quote the official site):

If you have left your dice at home but you have your laptop with you, this program could come in handy but I will probably stick to MachDice on the iPhone.
But Rock’n’Roll has one advantage over MachDice: it’s free!