Recently the German RPG blog “Sven’s Wortschmiede” has posted a tutorial of the game MyBrute. I have to admit that I was totally oblivious to the existence of this browser “game” before that but I just had to try it out. 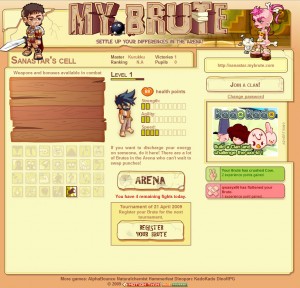 In MyBrute you first create your character. The character creation (as the rest of the game) is more or less random. The character has three stats: Strength, Agility and Speed. And by fighting against other “brutes” your character earns experience. When he has earned enough experience he raises in level and gets additional equipment, special abilities or perhaps even a pet.

The combat in the arena is completly automated, so the only thing you can do is sit back, pray and hope for the best. Aside from choosing which opponet you want to fight, you don’t have that much choices, but the combat animations are nice to look at.

MyBrute is neither a really deep or complicated browser game, but it’s a nice past time, if you are wasting too much time in front of the PC.

By the way, if you want to face my “brute” Sanastar just click here. Your character will then become my pupil and as his mentor I will get a fraction of the XP he earns.
So, what are you waiting for? Let’s fight it out!