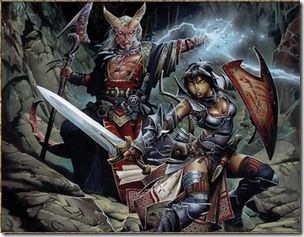 When you read some of my older post you’ll notice that I praised D&D 4th Edition on numerous occasions and recently I have become more of a critic. For quite some time I wanted to write a post about that issue, but feared it would lead to another edition war. That is not my intention, so please try to be polite in the comments and remember that what is fun for you must not necessarily fun for everyone!

When D&D 4th Edition was announced, I was pretty excited. A lot of the changes they’ve made in Star Wars Saga Edition were pretty good in my opinion and I was excited to see what they would do to improve D&D. D&D 3.5 Edition was a pretty good game, but there were a few things bothering me.

From the moment of the announcement I was in full fanboy mode. I ordered the “Wizards Presents” books, read every article about D&D 4E, listened to the official podcast an told all my friends about how cool D&D 4E will be. When I finally got the books I was blown away: awesome artwork, cool classes, a lot of interesting changes. The reliance on miniatures bothered me a bit, but since I already had enjoyed the D&D Miniatures game, I thought this wouldn’t be such a big deal.

A friend of mine, who is the D&D expert in my group offered to run D&D 4th Edition for us and so, I created my first 4E character. That is, I actually created a Warlock and a Wizard. but when the first session came I decided that a Dwarven warlock would be much cooler than my Eladrin wizard. We played a couple of sessions and it was not uncommon for a player to ask the GM if he could give another character class a try.

But it was not exclusively the wish to experiment with all those shiny new classes, but at least in my case,  something else had been bothering me all the time, although I just couldn’t put a finger on it. I thought that I just wasn’t comfortable with the class I’ve chosen. At one point we discovered that playing without miniatures was harder than we initially thought, especially since the Warlord of the group had a hard time making use of his powers when you only had a pretty blurry picture of the combat situation in your head.

Then I realized what has been bothering me all the time. For me, combat in D&D 4th Edition always pulled me out of the game. As soon as we started putting miniatures on a battle mat, immersion was gone. I stopped thinking about my character as my alter ego in the game world but it became that small plastic miniature on the game table. And I believe that a lot of the powers even reinforce that feeling for me. I just have a hard time imagining how certain powers are supposed to fit into the game reality. And that reduced my enjoyment of the game tremendously.

Shortly after that I started to realize that D&D 4th Edition is not the game I’ve wanted it to be. I tried so hard to love that game, but then it turned out very different from what I’ve expected, I just had to be disappointed. For a time I blamed D&D 4th Edition for it, but that’s definitely not fair. D&D 4th Edition is a good game, even if I don’t have fun playing it.

Perhaps I will give it another try in a few months or years, when the initial frustration has waned. Or I will just continue to focus my attention on other games. It’s not as if Wizards mysteriously destroyed all alternatives. If I want to play D&D I can still use my D&D 3rd Edition books, have some old-school fun with Swords & Wizardry or check out Pathfinder.

And again I want to remind you I don’t want to start another edition war. D&D 4th Edition is a great roleplaying game but it’s just not my cup of tea right now. So, if you enjoy the latest edition of D&D, don’t get angry at me when I don’t. And when I criticize the game, please remember that I don’t do it to take away your fun! Feel free to comment on this post as usual, but please keep it civil and polite. Thanks!