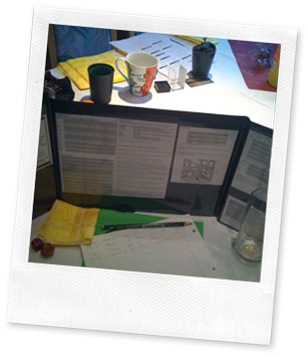 I can’t exactly remember when I decided to run my own games as game master. When I am not mistaken I have been playing roleplaying games for some time already when I read about “Traveller”. I was immediately intrigued by the game since it reminded me of the Foundation novels by Isaac Asimov. So I decided to get a copy of Travellers and run it for a couple of friends.

Alas I can’t remember much from my first steps into game mastering, but I think we never played Traveller again. Before I went to university I only ran a few games of Shadowrun. But for most of the time I played in other people’s campaigns.

When I started studying physics at the university I met quite a few people interested in roleplaying games. Within a few months I had a regular gaming group and we played Shadowrun again. I have to admit that I didn’t know all of the rules and most of my adventures were improvised on the spot instead of being properly prepared, but we had a lot of fun. For several years I ran a game almost every week, which helped me to improve my GM skills.

Since I’ve started GMing, I’ve run games using various systems including Deadlands, Shadowrun, D&D 3rd Edition, D&D 3.5 Edition, GURPS, WHFRP, several WoD games and many more. I never was a one-system-guy I always collected various role-playing games. Alas I haven’t run all of them yet. And a few of the games I own I will probably never use.

When I think about it, my motivation to run games as a game master is two-fold: first and foremost I love creating worlds and stories and on the other hand I love to try out new games. And since it’s pretty hard to convince other people that they have to run a certain game for you, I decided to run the games myself. And since my players keep coming back for more, I can’t be that bad as a GM.

Currently I run two games: a Rippers game for a couple of friends and a solo game with my girlfriend. If I had more players and a bit more time I would love to start a third game. But I wouldn’t mind to be player in a game run by someone else.

If you have any questions about my history as a game master, feel free to ask. And I am very interested to hear your story. Why and when did you start running games for your friends? Do you prefer being GM or do you enjoy being a player, too? Any comment is welcome!