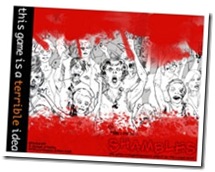 Last week, Duane O’Brien, blogger and owner of the RPG Bloggers Network, provided me with a free copy of Shambles, his Zombie RPG. But it’s no ordinary Zombies RPG. This time you don’t get to defend yourselves from the undead, you are one of them.

Shambles is currently available as a 55-paged (digest-sized) PDF (Affiliate Link) from RPGNow/DriveThruRPG for just $9.99 and is optimized for the screen. A print-optimized version will be released in the future.

In Shambles you don’t play the heroes. Before your characters were turned into undead nobodies with a craving for brains, you were living nobodies, spending uninteresting lives in a boring part of the world. The most exiting thing that ever happened to your character was his death.

There’s not much of a setting in Shambles, but that’s not a bad thing. Basically your setting is the modern world with Zombies thrown in. But Duane provides us with three campaign styles: Fast Food Zombie Fun, I Want My Life Back and Feeding Frenzy. In the latter you pretty much play a brain-dead, brain-eating Zombie right out of most Zombie flicks. In the first two campaign styles the characters still cling at least partially to their former lives. But all three styles are meant to be Good Clean Fun, Shambles is no horror game.

Shambles comes with it’s own game system called LAFFS, that’s the Light, Adaptable, Fast, Flexible System. To make action checks you roll pools of six-sided dice. Each die result that is in excess of a difficulty set by the GM is a success. A player can also spend LAFF points to adjust the value of a single die roll. LAFF points are earned by good roleplaying, getting the whole table laughing, et cetera.
The rules are pretty light-weight and should never get into the way. Shambles is clearly about the fun and not complex rules.

Each Zombie character consists basically of six skills: Lurch, Flail, Clutch, Brawn, Chuck and Sense. Skills usually range from 1 to 6 with 3 being the average. Character creation is either random or you can distribute 18 points and distribute them between the skills. Human characters aka Victims have different skills, that cover pretty much the same concepts: Speed, Dexterity, Stamina, Throw, Alertness and Strength.

Combat usually consists of simple contests of skill. Imagine a Zombie character want to grab a human. So he has to roll his Clutch skill against the human’s Speed. That means, the Speed rating becomes the difficulty of the roll. Damage caused is usually between 1 and 6 (1 pt damage is usually caused by bare hands, while 6 pts of damage are caused by acid, or being hit by a moving vehicle). Having more than one success does not cause additional damage but the victim drops something, is thrown to the ground or something more spectacular happens.

Aside from combat damage, Zombies have to worry also about decay. Usually Zombie characters lose 1 hitpoint per day, but they can regenerate hits by eating brains of humans. Yummy! Shambles even has rules for severed body parts and other small nuisances a Zombie character faces every day. Nothing a stapler and a bit of duct tape couldn’t solve. 😉

Let’s talk about fun. As soon as you start reading Shambles you notice that is was written very much tongue-in-cheek. The game doesn’t take itself too seriously and that’s a good thing. While reading the book I laughed out loud several times and the artwork is just hilarious. But beware, if you can’t stand gratuitous amounts of blood and pictures of rotting people, Shambles is probably not the game for you. But if you don’t mind some gore you can have a lot of fun with just reading Shambles. I haven’t played it yet, but I am sure it’s a blast.

So, is Shambles the right game for you? If you enjoy watching movies like “Shawn Of The Dead”, you’ll love Shambles. I think I could go on for hours praising this game. If you are into humorous games, you should definitely check this fine game out!