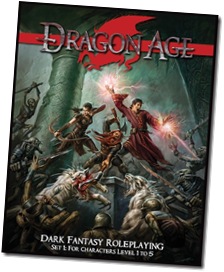 I think I have mentioned several times already that the Dragon Age RPG from Green Ronin is one of the games I am very much interested in.

Since yesterday the Dragon Age RPG Set 1 (containing a poster map of Ferelden, the Players Guide, the Game Masters Guide and three dice) is available for preorder. It sets you back $29.95 and will ship as soon as it comes available. You can also get two rulebooks and the poster map as PDF download which costs $17.50. But if you preorder the boxed set you get the PDFs for free and can start playing even before the box arrives! That’s something I really would like to see more often! Kudos to Green Ronin!

If you are not sure, if the Dragon Age RPG is for you, there’s a lot of free material you can check out first, including two preview PDFs and a design diary giving you some details on the design process. If you already own the rules, you can download a printable character sheet and some sample characters from the official site as well.

As you probably may have guessed already, I preordered the boxed set yesterday and I am currently reading the rules to give you a proper review next week. From what I’ve seen so far, Dragon Age feels like an old-school game. It’s pretty rules-light and very newbie-friendly. And the artwork is very sweet. It almost killed my printer as I printed out the two books, but it was worth it. I can’t wait to hold the boxed set in my hands!