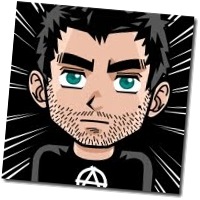 My good friend Michael Garcia has finally started blogging. Ok, I made him do it, because I thought it might help him overcome his writer’s block. Until now he has posted two posts and I am sure there will be many more to come.

“When the zombies do come, you will be looking for people like me for help.” – Michael Garcia

Please have a look at the “Mad Ramblings of a Crazy GM” and let Michael know what you like about his blog. Any comment is appreciated! And he’s not as crazy as he’s trying to make you believe. Trust me. 😉