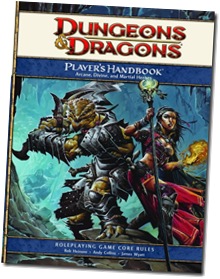 There are people who believe D&D 4th Edition is not really worthy of the name Dungeons  & Dragons while others say that 4th Edition is more D&D than it ever was. We’ve seen this discussion every time a new edition has been released but it seems the Edition War reached new heights with the release of D&D 4th Edition.

Fellow RPG blogger Robin Stacey aka Greywulf has recently written a blog post where he describes where he stands in this discussion. He brings up a few good points why he thinks D&D 4th Edition really is a worthy member of the D&D brand. He also points out that D&D 4th Edition – without the Powers system – is an “utterly brilliant role-playing engine. It’s lean, sleak and gorgeously put together.”

I have to admit that’s true. I don’t like the way the powers destroy immersion for me (your mileage may vary), but the system without the powers is probably one of the most streamlined implementations of the d20 System I’ve seen aside from Microlite20 (which was created by Greywulf, by the way).

UPDATE: You should also check out the interview Andrew Modro recently did with him.

Plans For After The Pause