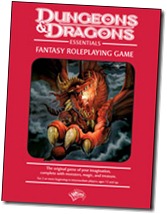 It recently came to my attention (mainly by means of fellow RPG Blogger Greywulf’s post) that WotC will be releasing a new D&D 4th Edition Starter Box later this year.

I have to admit that the box itself looks pretty cool and the box art has some old-school vibe to it, BUT this will no more an old-school product than the rest of D&D 4th Edition. I believe Greywulf’s excitement got the best of him in this case (No offense meant!).

Reducing the available number of classes and races to four and putting everything into a neat boxed set is not what old-school is about. The system used in D&D 4th Edition is still based on the d20 System that was created for D&D 3rd Edition and that is definitely a modern system. You can turn the base system into something more “old school” as Microlite74 etc. has shown, but I really doubt that’s what WotC is aiming for. If they want to retain compatibility to the D&D 4th Edition game, they will have to include the powers systems, healing surges etc. And in order to please the target demographic they definitely will not adopt notions like “Challenge the player not the character” and “Rulings instead of rules”. On the other hand I expect something which is closer to the D&D Miniatures game they released around the time D&D 4th Edition hit the shelves. It was basically a slightly simplified version of D&D with everything non-combat stripped out.

If you ask me WotC is not really interested in get the grognards into D&D 4th Edition, but they want people who played D&D as teenagers (and who remember that red box from back then) to get the game for their kids. It’s a marketing ploy, not a change in direction.

That said, I actually applaud any attempt at getting new people excited in the hobby. If you already play one roleplaying game, you are much likely to give other games a try. But I just don’t believe that D&D 4th Edition was mysteriously turned into an old-school game while I was not looking. 😉