After your great welcome, I am really eager to get my first article out of the door.
Therefore I have decided to give you a short review of one of my favorite light games. By “light” I mean, that it doesn’t involve a whole lot of rules and is easily accessible even to people who are not hardcore gamers.
Also, it has a dungeon, a hideous monster and lots of blood and gore…on the map anyway. So this should appeal to roleplayers, right? 😉 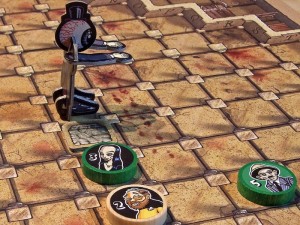 Hiding from the monster

I hope that you enjoy it and if you were expecting something meatier:  There is something in the pipeline for you!

Fearsome Floors by designer Friedemann Friese is a rules-light, whacky horror themed race game, in which players are trying to escape from the dungeons of evil Prince Fieso and avoid getting eaten by the horrible monster Furunkulus.

How does it work?

At the start of the game, each player gets four playing tokens of one color, representing a team of people who try to get out of the dungeon. All tokens enter the map, which represents a columned hall, from one corner and try to flee through the exit in the opposite corner. Whoever manages to get three of his tokens through the exit wins.

Movement is done in quite a simple way: All tokens have two sides, each with a number on them – one side white, the other black. The number on the current upper side of the token tells you how many spaces you can move the token this turn. After taking your move, the token is turned over, which makes it easy to distinguish which tokens have already moved this turn. The other interesting aspect is, that the numbers on both sides are different: While both sides of all tokens add up to seven, the distribution is different. There are pieces, that move six spaces on one turn and only one on the next, while other move three on one and four on the other.
Players take turns moving their tokens until all have had a chance to move. After that Furunkulus, the monster, tries to catch the players and eat them. 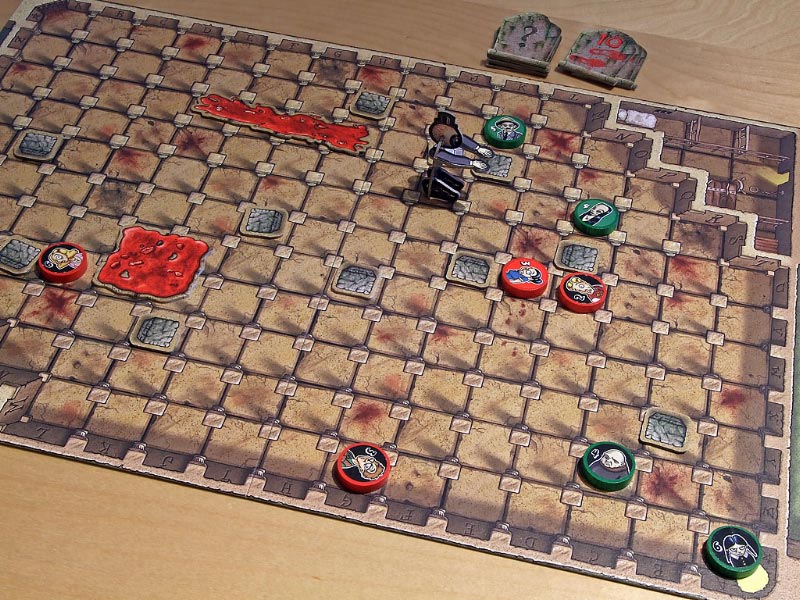 The monster starts on the exit-square. Movement is done according to a few simple rules. First, the current start-player draws the topmost card from the monster movement deck (which you can see at the top of the picture above). These cards either show a number, telling you how far the monster is going to move this turn, or a number of crosses, representing the number of player-tokens the monster will eat this turn – no matter, how far it has to move.

Then the monster starts moving in the direction it faces. After it enters a new square, it looks left, right and ahead, looking for player tokens. There are three possibilites:

You check for what Furunkulus can see in each square he enters and he will always turn toward the closest victim.
THIS is the really interesting part of the game: With clever placement of your tokens, you can try to steer Furunkulus towards other players tokens! But beware: This can easily backfire and miscalculations are common.
If Furunkulus catches up with a crunchy snack delicious victim player token, it is returned to the player and can re-enter the board next turn.
When the Monster walks against a wall, it will transport magically to the opposing end of the board (that’s what the letters on the boarder of the board are for).

So…is it any good? 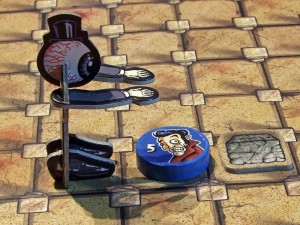 This is not going to end well...

Hell, yeah! First, it is a very simple game. Actually you know most of the rules now. Of course there are some additional pieces on the board (like stoneblocks, behind which tokens can hide, and blood pools, over which they can slide) and there are a few details I have left out of the overview, but basically that’s it. As you can see, it’s a simple game that can be explained in a few minutes.

Second, it is great fun trying to steer the monster towards the other players tokens – and only a little bit less fun when this doesn’t work out as planned and your own tokens get eaten instead. We don’t want Furunkulus to starve, do we?

Another thing, that is great about Fearsome Floors, is that it works with a wide range of players: It is playable with 2-7 players. You just have to be aware that the feel of the game changes with the number of players. The more players there are, the more chaotic the game will be. While you can try to plan ahead and steer the monster effectively with few players, this will prove very hard with many players. The sweet spot is 3-6 players – which is still pretty flexible.

But even if the rules are simple, it is not a very short game. The game takes about an hour.
This is aggrevated by the fact that moving your pieces often requires you to make agonizing decisions. You have to decide in which order to move your tokens, try to calculate the movement of the monster and guess what the other players are going to do. Some people can get caught in a severe case of analysis paralysis during this game and in that case you might consider introducing a turn timer to keep the game flowing.

Fearsome Floors is published in english by Rio Grande games and the original german Edition Finstere Flure by 2F-Spiele.