For the longest time I gamed without minis or a battlemat. Despite beginning to play AD&D with 1st edition, I never had a war gaming background and for the longest time my combats were purely descriptive. Eventually I started using a small dry erase board to map out the general layout of the area and give players an idea of their position during combat. But the maps where not to scale and not modified round by round.

Then along came D&D 3rd edition with its emphasis on strategic combat, and while I resisted at first I eventually gave in. But I didn’t want to spend my money on battlemats and minis, so I originally used my old Heroquest miniatures for the characters and their opponents. For a battlemats I used paper printed with a one inch grid that one of my players, who worked at an office store, laminated.

I eventually gave in and purchased minis (D&D miniatures, Heroscape, Mage Knight) and right now own more minis that I could ever need! I even got spoiled with a gaming table that had a HUGE dry erase board with a grid affixed to the top. By now you are asking yourself, “He did say CHEAP battlemats?” I did! I eventually stopped playing at my friend’s house where the table was at, and had to find a new option for mapping. 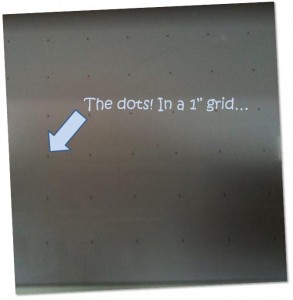 I had uses commercial battlemats before, but none truly met my needs. Some were to easily shaken or moved, in others certain marker colors were hard to remove. So I eventually returned to my old friend, the erasable board, and that’s when COSTCO came in.

I don’t usually make gaming purchases at the big discount club stores but made the exception this time. They sell these large 24”x36” magnetic boards with markers, magnetic colored tabs, cleaning liquid and an eraser for about $26 dollars. Best of all the boards’ surface is marked in a one inch grid, but instead of lines it has gray dots, allowing you to measure distance on the board and draw your maps, but not have your drawings overshadowed or lost against the grid printed on the surface.

The boards are heavy enough to stay put on a table easily. Placing the two together gives me a pretty large combat area for encounters, something I put to good use when playing D&D 4th edition where combat benefits from a large space that offers tactical diversity.

They’ve been a GREAT purchase, so much so that I have two! I will admit that their size makes them a little unwieldy to carry around, but I’ve managed with one for sessions away from home. I’ve had them for 3 years and they are good as new. That’s my contribution for gaming on the cheap!

Let me take this chance to say HELLO to all the guys I used to play with at what we called Sammy’s Playhouse. I miss that huge gaming table! And you guys too…

Gaming on the cheap