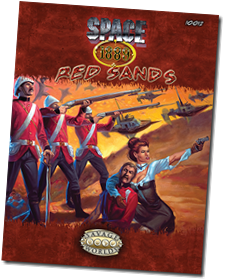 Almost exactly one year ago, Pinnacle Entertainment Group announced Space 1889: Red Sands, a Savage Worlds campaign setting based on the classic Victorian SF roleplaying game. I already own a copy of Heliograph’s reprint of the original Space 1889 rulebook, but the rules always felt a bit too clunky for my tastes, so I was really looking forward to the release of Space 1889: Red Sands. So I was overjoyed as the nice guys from Pinnacle Entertainment recently provided me with a preview copy of the upcoming campaign setting.

The 190-paged PDF is in full-color and contains a lot of original artwork that has been clearly inspired by the artwork in the original book – which is a good thing. Space 1889: Red Sands retains all of the charm of the classic while updating it to the modern Savage Words rules.
Please note that this preview is based on a pre-print PDF of the final book, so there might be some minor changes in the final product. Space 1889: Red Sands will be officially released in Summer 2010.

The setting
Red Sands is set into an alternative 1889. In 1870 Thomas Edison and Jack Armstrong travelled to Mars using an ether flier of Edison’s design which can travel through the luminiferous ether which fills the void between the planets. On Mars they encountered not one but two races of Martians and discovered the wondrous Canals. Other daring explorers travelled to the jungles of Venus which are home to dinosaurs and other creatures which have been extinct on Earth for millennia. The age of imperialism is in full gear with the grand nations of Earth creating colonies all over the planet Earth and its neighboring planets.
It’s a golden age of science and discovery. But alas not all is well in the twilight of the 19th century. The European nations are on the brink of war, natives all over the Solar System are revolting and anarchists and revolutionaries try to overthrow the established governments.
The setting provides GMs with uncounted possibilities for adventures. Most people will probably focus on space travel and exploration, but campaigns focused on politics, intrigue and diplomacy should work well, too. Since there are stats for Martian and Venusian natives, the players can “go native”, if that’s what they wish. The included plot-point campaign focuses on the exploits of the members of the Explorer’s Society. But more about this later.

The crunchy parts
Aside from a lot of background information on the setting, Red Sands adds a lot of setting-specific rules to Savage Worlds, which can also be used for your homebrew campaign, if you’re not that interested in Victorian SF. The included character concepts, hindrances and edges (especially the professional ones) can easily be used in a non-SF Victorian campaign. My favorite new edge is definitely “Liquid Courage” which allows a character to down at least 8 ounces of hard liquor to become virtually unstoppable without an detrimental effect on the character’s abilities.
The Status rules presented in the book definitely help players to get into the Victorian mindset. Player characters usually start as working class, but a character’s class can be as low as underclass and as high as upper class. The status determines a character’s monthly income and is a measure for the number of favors he may call in.  You can gain favor by doing heroic deeds and lose favor by being involved in scandals. Favors in Red Sands are much like a social currency you can use to gain money, assistance of NPCs or to pay go get admission to private clubs and social events.
The invention rules allows characters (and GMs) to design new devices including new airships and ether flyers. Invention is different from Weird Science because it allows characters to come up with devices that can be mass-produced later, while weird science gadgets are always unique and can’t be reproduced. As expected Red Sands also contains extensive rules on space transportation and rules for aerial ships including ship combat and ship construction.

The gazetteer
Red Sands includes a 4-paged gazetteer of the Solar System, giving players and GMs basic infornation of the planets and the asteroid belt. This section also contains maps of Mars and Venus.

The largest portion of the book is taken up by the game master’s section including the plot-point campaign. After given an overview of Red Sands’ campaign, the GM is provided with additional setting specific rules including more information on Status and expanded invention rules including special and rare components for player’s designs. Numerous mad inventions are also listed, which range from Atomic Power Generators to Walking Tripods which can be used as devices that really stretch the fringes of Victorian science or as artifacts from ancient civilizations.
The plot-point campaign follows the same conventions like most other Savage Worlds plot-point campaigns. It starts with an overview of the regions where the campaign takes places complete with an overview of the history, possible encounters and special rules. The encounters can be easily used if the GM needs to come up with an adventure on the fly or if he wants to add some flavor into a pre-planned game. The section about the regions of Mars is quite extensive and includes a map of the city of Syrtis Major, which is the British Crown colony on Mars.
Red Sands contains an adventure generator that allows GMs to roll-up a simple adventure in no time. If you love to improvise you can run whole campaigns with the adventure generator alone or you can use it to generate adventures between the actual plot points detailed later in the book. I’ve used this technique in my current Rippers campaign to great effect.
The Red Sands campaign which takes up the largest portion of the book is a grand adventure in which the player characters test their mettle against the Brotherhood of Luxor. And of course the very survival of the solar system is at stake! I won’t spoil the story here, but you can trust me, that it contains everything a good Space 1889 campaign contains. The focus of the campaigns is Mars, but the player characters will have to travel to Earth and Venus, too. The whole campaign is divided into 13 episodes and the GM is provided with detailed information on each episode including NPC stats, maps and tips for running the campaign.

Allies & Enemies
Red Sands concludes with an appendix containing the stats for various monsters and NPCs including the members of the nefarious Brotherhood.

Conclusion
Space 1889: Red Sands looks great and contains a lot of information on the Space 1889 setting. In my opinion the Savage Worlds rules are a great fit. And even if you don’t want to run a Space 1889 campaign, you can probably use a lot of the setting-specific rules (especially the invention and Status rules) in your own Victorian campaign. If you like the planetary romance genre and/or the novels by Jules Verne, you definitely should check Space 1889: Red Sands out when it hits the shelves later that year!