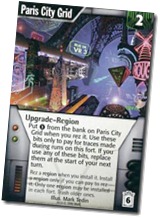 As I’ve written two weeks ago I am thinking about developing a Cyberpunk game powered by my Gears system. But there’s one thing that I don’t like about most Cyberpunk games: Hacking. Usually these games assume that the internet of the future is looking much like Second Life. You have an avatar that travels through subnets that look like futuristic cities. Intrusion countermeasure software looks like snakes, guard dogs, knights in shining armor that you fight with attack programs looking like weapons. While this sounded cool in the 1980s I don’t think this makes much sense – neither from a technical nor a gameplay standpoint.

The main problem with the “virtual world” concept is that you separate your hacker from the rest of the group. This always increases work for the GM and slows down play. When I remember correctly the latest edition of Shadowrun tried to remedy that issue by making the Matrix wireless and by adding “augmented reality”. Now hackers could do their “magic” in the real world. And at least from a gameplay standpoint that makes a lot of sense.

For my Cyberpunk setting I am considering something similar. While there are still normal desktop computers, portable computers, smartphones etc. you can also use special glasses or contact lenses to make use of “augmented reality”. When you look at a house, all necessary information is overlaid onto what you see. If you look at a person, you see all the details they make publically available. Business cards are basically a thing of the past.

When it comes to hacking devices you usually have to be in close vicinity to do so. While this may sound odd at first, it’s the best way to do it.No sane person would connect a server where the really interesting data is stored to the internet, so in order to access this data, you need to be at least in the same building to hack into it. So the hacker has to accompany his group when they try to steal the rival corporations research data. In a way, the hacker becomes the modern version of D&D’s thief. Overcoming security systems, hacking into CCTV cameras, disabling robot drones is the modern equivalent of disarming traps and picking locks. While this may break with one of the basic Cyberpunk tropes, it makes things much easier.

In the classic Cyberpunk genre, hackers usually still use keyboards (even when connected to the Cyberspace by a neural interface). From today’s standpoint touchscreen interfaces, gesture controls and perhaps even holographic displays seem more reasonable. While this is basically window-dressing, it’s still an important part of making the setting more modern and unique.

Rules wise I think it’s best to handle most easy hacking tasks like you simple skill rolls. Hacking a CCTV camera to make it show a freeze frame is just a simple check of the Hacking skill. Hacking into a secured server may be more like a skill challenge that starts with doing some basic research, writing custom tools, looking for backdoors etc. that are simulated by a couple of rolls on various skills.