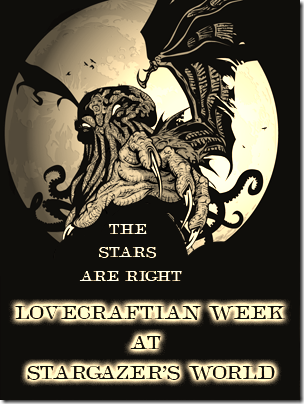 We’re having a special event this week at Stargazer’s World: Lovecraftian Week! The majority of the articles this week will be about gaming inspired by the Cthulhu mythos created by H.P. Lovecraft.

Call of Cthulhu is probably the best known roleplaying game based on H.P. Lovecrafts works, but in the recent years several games inspired by the Cthulhu mythos has been released. Take Cthulhutech for example which is a clever mix between the supernatural horror and the mecha genre. Another pretty recent game set into Lovecraft’s world is Ken Hite’s Trail of Cthulhu which makes use of the GUMSHOE system.

And even in some Fantasy game that are don’t refer to the Cthulhu mythos directly, influences of Lovecraft’s work can be found. Green Ronin’s Freeport is an example of a setting that contains cults, gods and creatures clearly influenced from the Cthulhu mythos.

So, stay tuned for some Lovecraftian goodness each day here at Stargazer’s World! And if you want to join the fun, just write something fitting the theme on your own blog, link back to this post and leave a comment here. It’s like some mini blog carnival this way. And feel free to use the logo I created (The Cthulhu artwork was created by DeviantArt user The-First-Magelord and was used under the Creative Commons Attribution-Noncommercial-Share Alike 3.0 License) for that purpose.