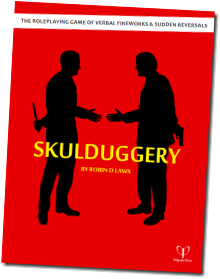 Robin D. Laws’ latest game “Skulduggery” is finally available for preorder at the Pelgrane Press store. If you preorder the printed version that will be released on July 1st, you will get the PDF now!

So, what is Skulduggery all about? Its a roleplaying game which plunges players into situations where they have to prevail by guile and persuasion, not brute force. The settings included allow GMs and players to create tales of modern politics and bureaucracy, the age of piracy, the high school drama club and interstellar trade. The preorder sets you back $22.95.

And while you are at the Pelgrane Press store check out their other products as well. The new Trail of Cthulhu adventure Castle Bravo for example costs $4.95 only! This is definitely a steal.

Option Paralysis and the Urge to Create Something Myself