Today I got my Orcus, Prince of Undeath Gargantuan Figure. I was so excited to get the news that my FLGS had received it that I spent all day daydreaming about it. To the points where I remembered an old toy commercial from the late 80s for a doll for boys, My Buddy, and spent the whole day singing my version of it on my head. My Orcus!

You say you haven’t seen that commercial? Let me illustrate…

Just imagine me as an adult running around with a gargantuan sized (in D&D terms) figure and having all sorts of fun, ridding the tricycle, playing fireman. Well not exactly that, more likely thrashing Bloodstone Pass, but you get the idea. 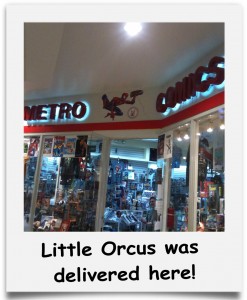 Let me go back in time a little. I used to be a big buyer of the D&D Miniature Game expansions. Often getting a whole case, sometimes two, and greedily grabbing all the Icons large sized dragon figures they put out, including the Colossal Red Dragon I’ve used ONCE during actual game play (almost a TPK in case you are wondering!). So when I saw an Orcus miniature in GenCon 2007 I was ready to buy it!

Quick forward to 2010… Some time ago I realized I have more miniatures that I could possibly ever use and stopped buying the D&D miniatures. I gave up plastic crack (what a friend called the D&D and Star Wars minis) and also stopped playing D&D, switched to Pathfinder, and for over two years purchased no miniature at all. When Orcus was finally announced I told myself, “You’ll never have any use for that miniature and it will linger in the closet with the dragon clan and their Star Wars At-At buddy!”  I ignored it and put it away from my mind. 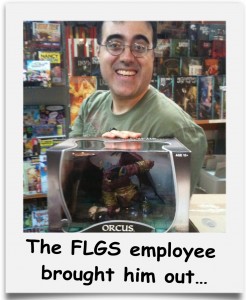 Then on impulse some weeks ago I called my FLGS and Comic Shop where I worked during college and asked the owner if she could get an Orcus miniature for me. She said she’d try and we left it at that. I knew there were arriving at stores and since I had been so late in asking for it I was trying not to get my hopes up. Imagine my surprise when a store employee (a friend and regular player of my weekly campaign) called me with the news it had arrived.

As soon as I left work I drove straight to the store and paid for it. It is an expensive figure, MSRP is $74.99 and with taxes and all that it ended costing a few dollars more. I was a little underwhelmed when I looked at the box. In all my excitement I had built up Orcus to be this gigantic figure that would forever change my gaming experience, but it’s just an expensive piece of plastics, a pretty, well sculpted and well painted piece of plastic, worth every penny I paid for it! 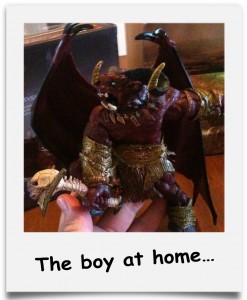 On this post you can find some (hopefully humorous) snapshots of me getting the figure, opening it and examining it. I found it to be a cool accessory; it comes with a detachable base of the appropriate D&D size, the box is nice and the display case serves as a nice place to store the figure. It also has a card with Orcus’ stats for D&D 4th edition. Since I no longer play the game I just glanced at it but really spent no time examining it.

When compared with the other figures in the D&D Icons lines, i.e. the dragons, Orcus is really bare bones. At least the dragons had maps and in one case other miniatures. So can I say I got the most bang for my buck? No… Still I like it. I had a Paladin who fought Orcus for a couple of rounds in an AD&D 2st edition game, and Orcus’ statistics are available in at least four systems. This is a multi platform accessory that I can enjoy in many games and systems. It can be used as a stand in for all sorts of gargantuan humanoids, so I will definitely place this miniature on the table more often.

Now my players know who the BBEG for the current campaign is going to be! Good luck, they’ll need it… 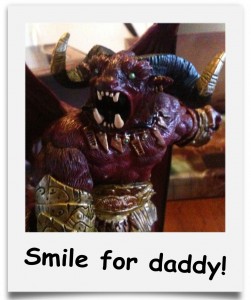 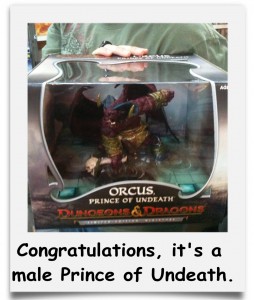