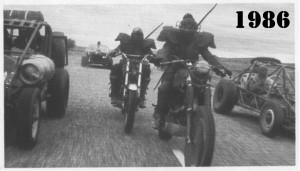 The nonsensical title to this posts is actually a reference to my first ever attempt at designing a game. From that attempt I learned that designing a game is hard, a mixture of creativity and perseverance. Almost like catching lightning in a bottle. If you’ll indulge me, let’s travel down memory lane to the year 1986, when I created my first game, 25 years later.

I remember when the idea came to me; it was History class, just after recess, during Ms. Trifilio’s class. I had been playing D&D for some months, starting with the Basic Red Box and moving to the Expert set. I knew there were other RPGs out there, I owned two issued of Dragon Magazine, but I was yet to read any other game, the AD&D rulebooks were somewhere in my near future, but I felt the urge to play something else. After talking with my friends I decided I would create a post apocalyptic game. I didn’t use that term back then, but I knew I wanted to play a game set after a nuclear holocaust (something I obsessed over back them).

While the teacher presented her lesson I was busy writing down a list of the character types I thought should be part of the game. I can’t recall all, there were about twelve, but they included soldier, pilot, cyborg, psychic and ninja. When I got home I wrote the details I needed for each, their saving throws, renaming some of the traditional D&D one, and bonuses for each “class”. Then I wrote up a weapons table, knives did 1d4 damage, swords and small handguns 1d6, rifles 1d8, automatic and heavy weapons 1d10, vehicular weapons 1d12. The equipment list also included transformable mecha take directly from Robotech (I was a HUGE fan, and still am in some ways), but the mecha had few stats beyond weapons and the rolls necessary to make special maneuvers. 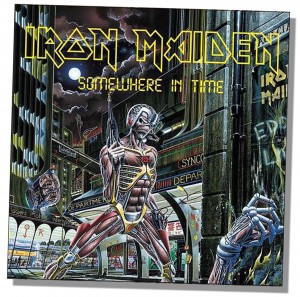 I realize this is not even a system, this was my modification of D&D for a setting, and even a half formed one at that. The antagonists were bands of roving road warriors looking for gas, strange vampires and the oppressive lawmen of an evil city state that looked exactly like Eddie the Head from the Iron Maiden records, specifically his look in the Somewhere in Time album (I was not a metal head, and while I listened to Iron Maiden occasionally I was not a big fan, however I had friends who were and I just loved the art on the LPs sleeves!). Eddie actually was an acronym for something I can’t remember right now, but they were genetically manipulated vat grown super soldiers who roamed the roads of the world enforcing the will and policies of their home city. The founding of the city gave the name to the game for this was the first real city to rise from the ashes of the nuclear holocaust and the game took place 25 years after the founding of the city.

The game began with the players taking refuge in a solitary monastery unbeknownst to them controlled by vampires. There they saved a prisoner who turned out to be a powerful psychic from a secret colony of psychic in northern Canada, who also happened to look exactly like Dr. Tachyon from the Wild Cards series (another obsession of mine back them). He asked the player characters for their help to reach the hidden colony and thus began their journey north. Along the way they faced Eddies, wild bands of road warriors and the soldiers of enemy city states. The psychic eventually was possessed by a disembodied entity that controlled technology and became a major antagonist.

Years later I played other post apocalyptic games, including RIFTS and I realized how my “everything and the kitchen sink” game was like RIFTS, but my game was created four years before RIFTS was published. Believe me, I’m not claiming MY game was anything like RIFTS; I never put as much work into it as Kevin Siembieda put into his game. My game could have been like RIFTS, but it could have been like World of Synnibarr as well, so I’ll count myself lucky that I didn’t stick with it and went back to playing D&D. Why you ask? Well that had to do with the second lesson I learned from 25 years later, don’t put your game on the hands of another GM!

Halfway through the plotted adventure I had some days off from school and visited my uncle so we took a break from gaming. One of my friends asked if I minded that he Game Mastered some sessions for the other players of the 25 years later game. I said sure, and left for vacation. When I came back, to my surprise, the game was in shambles. The players had reached the secret psychic colony, defeated all the Eddies and escaped Earth in a spaceship after blowing up the planet. Needless to say I was pissed. This was not the game I had planned! True I had not conveyed my expectations to my friend, but I was an inexperienced Game Master and I felt MY game had been ruined.

With the wisdom of years I realize that this might have been a great opportunity, that this were my players contributing to the development of the game, but I was too young and too pig headed to realize and I simply scratched the game and moved on to other things. Soon after that I began the first incarnation of my long running homebrewed fantasy campaign.

Years later I gathered the old gaming group and we replayed the first adventure using some system I can’t remember. Ever since I have never returned to my 25 years later game, I did try to design other games, but none of them lasted as much or was as much fun as the game we played in 1986…

PS – This post is dedicated to my first players, Ricky, Jorge, José Luis, Hector, Clinton and Emilio. I don’t play with any of them anymore, but they were there with me when I began this journey into role-playing games!