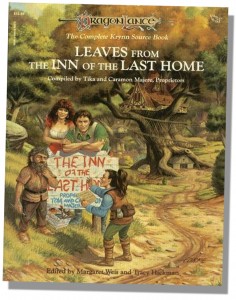 Don’t worry; this has NOTHING to do with all the electronic cooking games out there. This is about gamers and the food they eat when they game. Junk food and role-playing games are connected in poplar culture, and in all truth some games will devour prodigious amounts of chips and soda. Undoubtedly some groups try to eat healthy, bringing fruits and veggies to the table, but I suspect the majority of use would rather have some Mountain Dew than water! (For the record I don’t like Mountain Dew, I’d much rather have Jones Soda, but the Dew but it emblematic.)

There are things like Igor Bars by John Kovalic out there! These sound delicious, but are probably heart attack inducing. But my reason for this post is just not to share recipes (we can certainly do that) but to talk about how food could enhance gaming and set the mood for a game!

I remember when I first read Leaves from the Inn of the Last Home. It was during my Dragonlance period, having just finished reading the Dragonlance Chronicles and was getting my hands on everything Dragonlance. This was NOT a gaming supplement; it was a collection of stories, poems and recipes. Yes you read that right, recipes. I was so intrigued, it was like having the cookbook of a fantasy Inn, and it seemed like magic. This was back in 1988 and I didn’t cook at all. In fact I avoided cooking for years so I never got to try Tika’s recipes.

The only time I had an edible prop in a game was during a Star Trek Adventure where the game master had Romulan Ale available for us. It wasn’t truly the legendary alcoholic beverage of the Star Trek universe, we were all still underage, but water with food coloring. I barely remember the adventure (sorry José) but the pitcher of blue liquid in the middle of the table really captured my imagination. And by the way, that last link has some nice recipes for mixing up alcoholic versions of the Romulan Ale, Star Trek party here we go!

Since then I’ve embraced the joys of cooking and the old storage room with the fridge and microwave has actually become one of my favorite rooms in my house. I love cooking and often cook for my players. My famous and artery clogging Gordopletas® have graced games and geeknics alike. Still I have NOT actually created a dinner to enhance a game.

When I began my current campaign, which is a pirate/swashbuckling themed Pathfinder RPG game, I wanted to take my players out to a restaurant called La Guarida del Pirata (The Pirate’s Hideaway, beware that last link is in Spanish) a pirate themed seafood restaurant. We didn’t go but I cooked for them, we watched a movie and discussed campaign expectations and character generation.

It was a great experience BUT I missed the opportunity to make food part of the experience. I want to change this, I really want to find an opportunity were I can cook for my players and make it part of the gaming experience. Perhaps we have a dinner party in game and then have food in real life. I want to play a zombie game for Halloween, I can already think of some possibilities. Brains!

Do you integrate food into your gaming? Do you cook or prepare something special for your players?

I better dig out the Leaves form the Inn of the Last Home. I’ll keep you update of my attempts to bring food into my games in a meaningful way.

What about the Pathfinder Role Playing Game Character Change Log? A review…