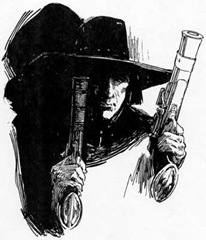 I can’t deny it, I am an avid Savage Worlds fan. I like the rules-light system and the original settings released for it. I think the first time I heard about Solomon Kane was when Pinnacle Entertainment announced “The Savage World of Solomon Kane”. When I started doing some research in the subject matter I was immediately intrigued. Solomon looked very much like the prototype of my favorite Warhammer Fantasy Roleplay career: the Witchhunter.

Solomon Kane is the hero of a number of stories written by Robert E. Howard, who is probably better known for his sword and sorcery stories about the Cimmerian Conan. Kane is a gloomy man, all clad in black who wanders the world to fight evil in all its forms. The stories are set into the late 16th and early 17th century, an era we don’t see that often in roleplaying games.

The first thing you’ll notice when you have a look at the game is the beautiful artwork. Usually the production quality of Savage Worlds products is already pretty high, but TSWoSK is definitely a highlight. The style of the cover and the interior artwork are a perfect fit for both the setting and the era.

The Savage World of Solomon Kane is a stand-alone game which contains all the rules you need to play. While the rules presented are more or less identical to the ones presented in the Savage Worlds Explorers Edition (read my review here), references to modern equipment, mad science, etc. have been left out, because they don’t fit into the genre. Since I already reviewed the core rules earlier, I won’t go into detail here. The book also contains a summary of all the Solomon Kane stories, but players and GMs are recommended to read at least a few of the stories.

One difference between the SWEE and the Solomon Kane game are the magic rules. The SWEE magic system has been heavily modified to better reflect the magic presented in the stories. Power Points aren’t used and there are only two Arcane Backgrounds (Sorcery and Shamanism) available. The most important difference is that while magic can be either used for good or ill, it’s always considered to be evil and ungodly by Kane and a lot of his contemporaries.

TSWoSK contains the obligatory Gamemastering section which does a good job of introducing new GMs to their job. But even veteran GMs can learn a thing or two when it comes to the particularities of the setting. There’s even a chapter dedicated to Adventure and NPC creation, which can be very helpful for anyone running a Solomon Kane game. As with any good Savage Worlds game, there’s of course a handy Adventure Generator which allows GMs to come up with a basic plot by rolling a few dice. Especially when you didn’t have enough time to prepare your game, the Adventure Generator can help you to improvise something in no time. The book also contains a plot point campaign which allows the characters to travel in the footsteps of the famous adventures himself. But you’re of course free to run your own stories as well.

Another highlight of the book is the vast background section. There are lots of information on the life in the times of Solomon Kane and pretty detailed descriptions of important persons and events during that era. Together with the locations described in the plot point campaign, the GM get’s a pretty good picture of the world in that era. The game also contains enough background information to run your own campaign set in Kane’s world or to just use the book for running other 16th/17th century games.

The 355-paged book concludes with a bestiary, a very good looking character sheet, the Savage Worlds templates (for you to photocopy and cut out) and a two-paged index.

In my opinion The Savage World of Solomon Kane is one of the best Savage Worlds releases so far. Especially if you and your gaming group are interested in the era, you get a lot of bang for the buck. The hardcover book is available at Amazon.com and probably your local gaming store, but you can also get the digital edition at DrivethruRPG. The lavishly illustrated PDF sets you back $35, the printed copy usually costs $5 to $10 more.

This review is based on a read-through of the book. The review copy in PDF format has been provided by the publisher.