If you have been following this blog for the last two years you’ve probably noticed that I have a spot for the small press publishers. In my humble opinion, in the recent years the most innovative games have been released not by the major publishers (like WotC, White Wolf, Steve Jackson Games etc.) but by small companies. One of these companies is Rogue Games, which is probably best known for their roleplaying game Colonial Gothic.

I have to admit that I’ve heard of Colonial Gothic a long time ago but didn’t pick it up for a long time. I think I started looking deeper into what Rogue Games had to offer when I started following Richard Iorio II on Twitter. Richard is one of the two partners-in-crime, the other one is James Maliszewski of Grognardia fame. Richard and James have been working as freelancers for quite some time before they decided to start their own company: Rogue Games.

Since then they have been quite productive! Rogue Games has currently three game lines: Colonial Gothic, Thousand Suns and Shadow, Sword & Spell. All these games uses Rogue Games’ 12° system which uses a unique “2d12 roll under” mechanic. The rules are very easy to learn and are fun to use. At this year’s Gen Con Zachary Houghton ran a game of SS&S for me, Jeff and a couple of guys and we had a blast! While the rules are a bit different in each of the games, the core remains the same, so you can easy use firearms from Colonial Gothic in SS&S or the sanity rules from SS&S in Thousand Suns.

Colonial Gothic is definitely a very unique game. It’s set into the years around the American Revolution. Do you think you know what happened back then? Then you think wrong! Colonial Gothic combines historic roleplaying with elements of supernatural horror, something which is quite rare these days. Alas I haven’t been able to play this game, yet, but Richard promised to run it for us next Gen Con. This is something I am very much looking forward to!

Thousand Suns is a classic SF roleplaying game along the lines of Traveller. If you are into galaxy-spanning imperiums, vast armadas of space ships, intrigues at the emperor’s court and exploring ancient alien ruins, then you’re right at home with Thousand Suns. But it’s also flexible enough that you can run almost any SF campaign with it, as long as it’s not too freaked out. As with Colonial Gothic I haven’t had the chance to actually play it, but it’s definitely among my first choices when I plan a SF campaign. 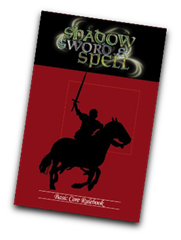 Shadow, Sword & Spell is a sword & sorcery roleplaying game inspired by the works of Robert E. Howard and H.P. Lovecraft among others. In my opinion SS&S is even more lightweight than the other two games when rules are considered, which makes it a perfect entry into the 12° system. And the human-centric, low-magic sword & sorcery genre is a welcome change to the classic high-fantasy genre that seems to dominate our hobby right now. If I had to pick my favorite game from Rogue Games’ portfolio, it would definitely be SS&S. It’s a real gem.

By the way, did I mention that when you buy any of Rogue Games’ products in print that you get the PDF for free? In addition to that none of their PDF products sets you back more than $9.99 and they are of course DRM free! That’s what I call customer service. I sometimes wish bigger companies would realize that what Rogue Games’ and a few other are doing now is the right thing to do. Some bigger companies like Paizo and Green Ronin offer PDF+book bundle deals, too, but usually you have to pay at least $5 extra, if you want the PDF, too. When you buy a book from Rogue Games in print you always get the free PDF even if you bought it in a brick and mortar store!

And last but not least, I had the honor to meet Richard Iorio II and Greg Videll (who wrote the Starships book for Thousand Suns) at Gen Con this year and had several good chats with them both. For some reason the Rogue Games became our meeting spot at Gen Con, probably because we knew we could chat with some of the nice Rogue Games people. This year Daniel Perez was helping out at the Rogue Games booth, so I had the chance to finally meet him, too!

Some reason for my praise for Rogue Games probably comes from the fact that I met Richard and the others at Gen Con. There are quite a few great products out there, but things get a bit different, if you actually know the persons involved. But even if I haven’t gone to Gen Con this year, I still would wholeheartedly recommend any of the Rogue Games products. They are that good.

So, if you are looking for some interesting games, why don’t you check out the Rogue Games’ website or follow them on Twitter? You won’t be disappointed!