For quite some time I could not understand the appeal of antiquing and the TV shows about it. Likewise some of you may find the idea of shopping for bargains at discount stores unpalatable and would do anything to avoid being dragged by your significant other to either of the aforementioned activities. But what role player worth his weight in gold pieces would refuse the opportunity to hunt for games in used books stores? Who hasn’t felt the thrill of finding an out of print book in a store, or even for sale on an online auction site? I assure you if there was a show called the Used RPG Book Road Show it would draw a massive geek audience. Hey wait, this may just be the idea I need to call my producer friend about!

Mind you, I have not enjoyed this thrill that often in my life. In Puerto Rico where I live there are NO used book stores that I know off. There was one many years ago in Old San Juan, the capital, but it never had any gaming books. Some comic and gaming stores have older books, but none at discount prices, and they don’t have any old book in stock for which I’m willing to pay MSRP. That’s the reason I hunt for used book stores when I travel abroad, much to the chagrin of my significant other.  I can recall my most significant finds while book hunting and the instances where I found gaming books in the unlikeliest places.

The first one actually happened relatively early in my gaming career, about a year after I began playing, just as we were beginning to switch from the D&D boxed sets to AD&D. I had gone to visit my uncle and spent a few days at his home. When I returned my players had all sorts of modules I had not seen before. Back then I had no idea what those modules were but now I know they included the Slave Lords series and the Against the Giants modules. I asked them about it and they told me a neighbor in the building was moving and had a yard sale (that involved no yard to speak off, as all this took place in an apartment building, but you get the point) that included some gaming books. Where there any left I asked, and my friends said yes, two books no one was able to afford. 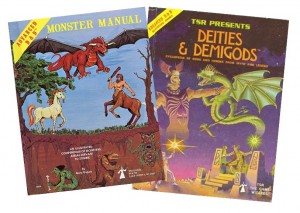 I hurried to the neighbor’s house and knocked on the door inquiring about the books. I must admit this was not a friendly gamer; he took no interest in sharing the love he must have felt at some time for the hobby. Instead he told me there were two books left, and that both were $10 each and I would not be able to afford them. I asked to see them anyway (insistent little punk that I was) and they were the original AD&D 1st edition Monster Manual with the Sutherland cover and the Deities & Demigods with the Cthulhu and Melibonéan Mythos. I had no idea Deities and Demigods had anything special about it back then, just that theses were AD&D books and that I wanted them.

I realize I sound like an old codger when I say this, but in 1987 or 88 I was a teen and getting $20 was no small feat. But I rushed to my mom and grandfather and begged them to help me buy the books, I had $8 so all they had to give me where $12. Mom was reluctant but gave me some money and my grandfather completed the $20. I went up to my neighbor’s apartment and bought both books. I was now the proud owner of two relatively new AD&D books.

I cherish those books the Monster Manual saw years of good use and is still in excellent condition. Deities & Demigods I later learned had some content that had been removed from later editions, but what I loved the most were the additional “deities” the owner had cut and pasted on one of the interior covers, Deities & Demigods statistics for Bugs Bunny, Daffy Duck and Popeye. Needless to say my players were soon facing the Wascally Wabbit!

I’m also always thrilled when I find role playin games in Spanish. English is not my first language, although I am fluent and speak, read and write it with no difficulty (well that last one is debatable) my native language is Spanish. Amazingly it is almost impossible to get games in Spanish in Puerto Rico. Of course now with the Internet it’s another matter, but I have never owned any D&D books in Spanish. What I do have is a Traveller boxed set in Spanish, the black box with the blurb of the Free Trader Beowulf distress signal. I had already read Traveller in English by the time I got this but I was so thrilled when I found it, it’s one of those personal treasures in my gaming collection.

Another game in Spanish I managed to acquire was Aquelarre; the blurb in the website calls it the medieval demonic role playing game. It’s an excellent book, a pseudo historical game set in medieval Spain. I actually got the main book and a supplement at the International Guadalajara Book Fair. I was there working and did not even think about looking for rpg books, I was so thrilled when I saw some copies there. The people selling it had no idea why they even had the copies and I doubt they expected to sell it in the book fair, so it was a great find and one of the highlights of that trip.

Another Spanish role playing game I enjoyed but no longer own is a comedy game, one based on the funny and weird comic created by Cels Piñol, Fanhunter, the epic decadent role-playing game was an amazing read, but it belonged to a friend and I only got to read it. I need to get my hands on a copy! 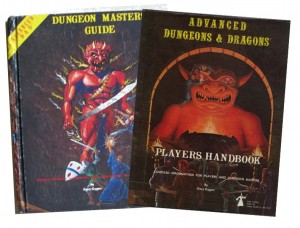 But my greatest gaming find happened somewhere else, a placed I never expected to get any gaming books at, the Salvation Army. I was dropping off some clothes and someone told me they had a used book section and it piqued my curiosity. I walked in and started looking at the piles, grabbed two used novel and after a brief perusal I found treasure, a copy of the AD&D 1st edition Player’s Handbook and the Dungeon Masters Guide with original covers!

This was during my AD&D 2nd edition days and I had sadly sold my 1st edition PHB and DMG to afford the new rulebooks, so my collection was incomplete. With trepidation and excitement I walked up to the register put all four books in the counter and asked, “How much?” The guys looked briefly and said, “One dollar…” I though, wow what a deal, a buck for each! So I fished $4 from my wallet and handed it to the cashier. He looked at me funny and handed back three dollars. It wasn’t a dollar for each book, but a dollar for all four. And that’s how I got two AD&D books for fifty cents.

(And that right there is a sitcom in the making, just imagine the rapper DM a game for other celebrity rappers and hip hop artists!)

And those are just the major game finds I can think of from the top of my head. There have been some others, like original Gamma Worlds modules and some of the classic AD&D modules I mentioned before. So I take it back, I’ve had some pretty sweet game finds in my life.

What game treasures have you uncovered? What have been your gaming finds?