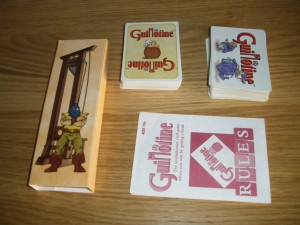 Generally my Dungeons & Dragons game starts at 1:30pm on Saturdays. Sometimes not everyone can make it. Sometimes enough people can’t make it that we opt out of D&D all together for some other game to play. Last weekend was one of those days for me. The game we chose to play was a pick by my Fiancé’s. It was a Wizards of the Coast game called Guillotine.

This easy to learn card game was a lot of fun.

Game play, for two to five players, takes approximately 30 minutes. Game equipment consists of two decks of cards, “Nobles” and “Actions”, and a small cardboard structure representing the guillotine itself. This is mostly symbolic, though it can serve as a convenient indicator of the direction of the “line” of face-up Noble cards played on the game table representing condemned persons waiting to be guillotined. The Nobles cards carry points values and are collected by players after execution, while Action cards allow the player to perform various acts including rearranging the order of Nobles approaching the guillotine, steal Nobles or Action cards from other players, enhance the point values of certain categories of Nobles (see “Noble Types” below) and so forth.

I could not help but think of the card game Munchkin while we played this. I hate Munchkin, but I really liked Guillotine. Some of the cards in the Action deck of Guillotine are pretty crazy and can change the game around at any moment. For a quick need-a-game-in-a-pinch, Guillotine with it’s easy to learn quick to play rules fits the bill perfectly.

Tags: GuillotineWizards of the Coast

Sci-Fi Setting, looking for some feedback…