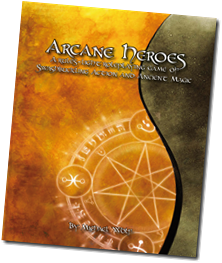 Yesterday I finished my first play-through of Fable III, the latest game by Lionhead Studios. For some reason this game inspired me to create a 5-paged roleplaying game which uses a few elements similar to what we see in the video game.

Characters in Arcane Heroes are members of ancient bloodlines which have produced many great heroes (and dreadful villains) in the past. But the world has changed, the industrial revolution has shaken up the old order. The ancient bloodlines are all but forgotten, but in these dire and gloomy times, heroes are needed more than ever.

Arcane Heroes uses a simple dice pool mechanic and contains all the rules needed to play a game. Currently there’s no real campaign setting nor a character sheet. Since I have pretty much written the whole document in one session earlier today, it’s not edited nor play tested. (Hmm, why I don’t participate in any 24-hour-RPG contests is beyond me…) So, you have been warned! 🙂

If the rules survive the first playtest I might release a more complete edition of Arcane Heroes (including a setting and a character sheet) in the future. You can check out Arcane Heroes by clicking here. I’ve also embedded a preview into this post which you can access by clicking “Continue Reading” below.

[UPDATE]: Some people are not comfortable with Scribd, so I added the download to my Google Site as well.