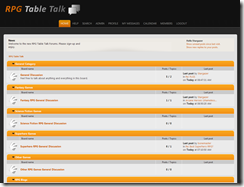 Today the “RPG Table Talk” forums went life, a new forum for roleplaying game discussions hosted by Jeff Uurtamo of RPG Circus fame.  Currently the number of active threads can be counted with just one hand, but there’s hope that the activity will improve as soon as we get the word out.

By the way, Jeff offers to add additional boards by request. If you have a blog, website or even your own game and you need a forum where you can discuss it, send a private message to Jeff or me (I help Jeff out as co-admin) and we’ll see what we can do.

I hope I’ll see a lot of you over at the RPG Table Talk forums later today!