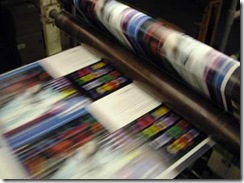 A couple of days ago I have been invited into DriveThruRPG’s Print-On-Demand preview program. Yes, you read that correctly: In the near future you will be able to order hardcopies of the PDFs sold at the site. As beta testers we were given some store credit that we should use to pick a print product and order it to test the order process, shipping and to give feedback on the print quality. From what I’ve seen so far, the order process worked like a charm.

In my opinion that is a huge step in the right direction. While some gamers like to have PDF copies of their favorite games, others prefer a physical copy. And in some cases having both is the way to go. And undoubtedly DriveThruRPG offers the hugest collection of digital RPG products on the net. And in the future these products, some of which have never been available in print, will finally be available in soft- or hardcover for pretty reasonable prizes. Currently the list of books which are available in print is pretty short, but in the long run most of the books should be made available in print.

What surprised me the most is that the shipping costs within Europe are pretty low. Shipping a 1.171 lbs book to my German address set me back mere $5.15. That’s well within what I am willing to pay for shipping which takes about 5-7 days. But it remains to be seen if they really manage to ship in a mere week and if the print quality is on par with what I’ve come to expect from other POD services.

Currently I am still waiting for the book I’ve ordered to arrive. As soon as I hold it in my hands I will give you another update. So stay tuned!

IN MY TRAVELLER UNIVERSE … Part 2