With such a convoluted title to this post, I better make some sense out of this! 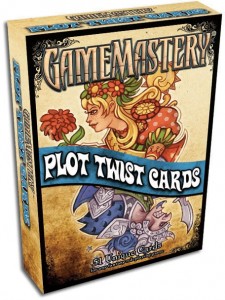 What is this post? First and foremost a review of the GameMastery Plot Twist Cards… What are this cards I speak of? Well they are part of a series of GameMastery Cards produced by Paizo that illustrate treasure, items, NPCs, etc. While I was originally intrigued by the idea I was less than thrilled when I got the original cards. True having a card with the image of a certain piece of equipment or a magic item may be cool but I discovered that I forgot to hand them out or some players really did not care for them. Maybe I was not using them effectively. Paizo has gone on to produce decks themed to their different Adventure Paths and I imagine this must be a boon for those who play the Adventure Paths.

Since beginning my, currently in hiatus, Pathfinder RPG campaign I wanted a different feel to it. I wanted to encourage swashbuckling actions and the feel of action/adventure movies. To accomplish this I implemented the use of Action Points (the old D20 variant that appeared in the 3rd ed version of Unearthed Arcana not the new Hero Point rules recently published for Pathfinder, I began the game long before the book where they appeared was published) and included Scratch Factory’s Swashbuckling Cards to allow the players to alter the game in significant ways.

Over the last couple of years I have embraced the idea of shared storytelling where players influence the flow of the game. I have not gone full indie, all narrative no GM, “dice be dammed we are telling a story” storytelling just yet, but enough to allow the players to impact the flow of the game in significant ways. I don’t use all the Swashbuckling Cards; I revised them all and removed two I believed might prove problematic.

I also allow players to draw two cards per session and use them, either for the effect described or as a free Action Point. As a GM I also draw two cards I can use during the game with any opponent or NPC or use as Action Points for the player’s opponents. If I feel a certain card would simply ruin the game I can refuse to accept it and immediately give the player a new card. I have only done this once in over a year of playing. 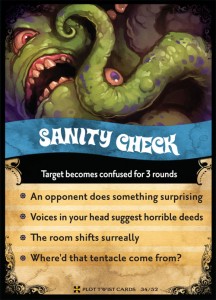 My players have embraced the cards and their inclusion has greatly enhanced the game. So along come the Plot Twist Cards, I saw the cards and snatched them right away. They come with their own rules and each card has an evocative title, a small illustration and various suggestions how the card may be used in game. They are excellent as even the seemingly negative cards have suggestions that may be beneficial or fun. The idea is that player can use the cards to help them or make things more challenging, depending on the story they create together with the GM.

I doubt my players would use any of the cards to make things harder for them. They may prove me wrong, but I don’t see it happening. Each card also has a rules bonus or penalty that can be used instead of the more esoteric opportunities presented by the card.

I think the open nature of the cards, the need to interpret and come up with possible applications for the cards will be the hardest aspect of the Plot Twist Cards. The Swashbuckling Cards I’m currently using, while open in many instances, have a specific effect that may need adjudicating, but it’s easily applicable. Rarely have we spent more than a minute or two clarifying a doubt on the card’s wording.

The Plot Point Cards require more interpretation and are much more open ended unless you simply use the penalty or bonuses printed on them, but if you limit yourself to this you are robbing yourself of the myriad opportunities the cards bring. They present a true opportunity to include the players in the creation of a collaborative story.

The rules that come along with the cards call for the GM to give two cards to the players at character creation, and an extra card when they go up a level. This seems too little for my current campaign, but that is the feel I am going for, larger than life adventure. The suggested pacing may work better for a traditional campaign.

Will my players like the Plot Twist Cards? That remains to be seen, I plan to show the cards to the players and discuss it with them. I am a little concerned with the open nature of the cards, I can see some players embracing it, other struggling, but I think that is part of the magic of the Plot Twist Cards. They encourage role-playing, to me that is a good thing!

Here is looking forward to the Condition Cards…