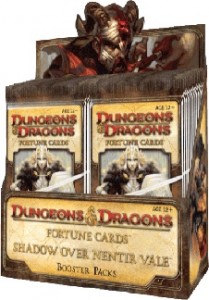 There’s been a storm in the Twitterverse and the Blogosphere, a storm of FORTUNE! (Fate would have sounded much cooler, thanks designers at WotC for ruining my opening line; you are the cause of all evil!) Well that does seem a little bit extreme, but I had NO idea what the D&D Fortune Cards until I started reading tweets about them. So I went to the Internet to find out what they were and found this.

I don’t play D&D 4th edition anymore and have only marginally kept up with the newest incarnation of Gamma World where similar cards seem to come from. I try not to write about D&D much since I don’t play, and my last rant on 4th edition was a little angry. So I’ll follow Newbie DMs advice oven on Twitter and take a deep breath.

The thing is, I don’t think the idea of the Fortune Cards is bad per se. I recently wrote a post about Paizo’s Plot Twist Cards and the use of that sort of tools in the game. From what I read, and the two samples posted in the webpage, Fortune Cards are aimed at enhancing combat. I think circumscribing them to just combat is a missed opportunity. Other similar tools like the Plot Twist Cards, the Swashbuckling Cards, or the old TORG Drama Deck, are designed to enhance combat and role-playing, they engage the player in the storytelling.

Making the cards combat oriented also reinforces the view that D&D is a combat game and not a true role-playing game. I don’t agree with that statement, you can role-play with any rule system, even a combat heavy one. And besides I think they are gearing their product to their target audience, obviously if you are playing D&D 4th edition you enjoy the way the game is nowadays. Will the idea of Fortune Cards slow down combat? I have no way of knowing, but from using similar products I don’t believe they would be a major complication to players used to the system.

Which brings me to another point Newbie DM made that I agree with (and I paraphrase here) Wizard of the Coast produces D&D to make money, just like all other game companies, and they have the right to make money of their products as best they see fit. I recently read a column by Javier Grillo-Marxuach on his year without Star Wars which only tangentially has to do with what I’m writing about (and happens to be a great read), but makes the point that as attached as we might be to something the owner/creator can do with it as they please. We have NO say about WotC does with D&D; all we can do is play the games we like and support the companies that produce the games we enjoy.

Having said all that (and can you believe all that was a disclaimer so I could finally rant!) I think there is one thing WotC may be doing wrong. Well two… First of all making the cards collectible, i.e. random, and having different levels of rarity. I guess there must be some crossover market between role-players and collectible card gamers, but I don’t think every single D&D player is a CCG collector or vice versa. I’ve played the collectible game before, with CCG in the distant past and with the D&D miniatures recently. With the minis at first I did not mind, heck copies of extra minis just expanded my collection, but it came to a point where I could no longer rationalize getting 10 pig carrying peasants searching for a beholder, so I gave up. 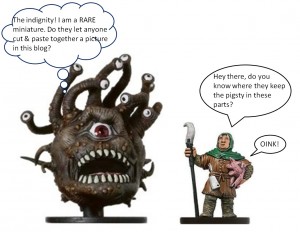 From the echoes out there in the Internet I gather many D&D fans are not too keen on the collectible aspect, of the miniatures in the past and the upcoming Fortune Cards. WotC must have other data; after all they are still in the CCG business. But they did drop the completely random minis and tried another strategy, which apparently did not work as well either. Still the collectible Fortune Cards are a smaller investment, is not a requisite for playing and they believe it can enhance a players enjoyment so more power to them if they can sell it to the fans.

The one thing that did bother me was this quote from the Fortune Cards page: “For some Wizards Play Network programs aimed at experienced players, Fortune Card purchase will be a requirement to participate, but our broadly-appealing programs like D&D Encounters will feature their use without such a requirement.” How will dealing with random Fortune Cards challenge experienced role-players? I can understand this for CCG, but for an RPG? It just seems to be a way to make a quick buck, the cost of playing built into the buying of cards. Again they have the right to make money, but the rationale here, without further information on how it will works seems strange.

Still I don’t think the current economic environment supports this type of strategy. I can understand the need for a company to create a revenue stream and find new ways to sell their merchandise, but I believe the RPG market is better served by quality products, exciting rules and new ideas, not bells and whistles. I can’t wish them ill, I agree with the idea that a healthy D&D brand is good for the RPG business, that may be changing, but so many still associate D&D with RPGs in general that I hope them all the best.

But what do I know… I can’t blame them for trying to try new things, they want to entice new players to try out the game and I know that younger gamers may have different expectations. What do I know I’m just a grognard.

That’s my opinion, your may be different, and I would sure love to hear it!

PS – A big thanks to Newbie DM, I learned of the Fortune Cards from his tweets and he made some excellent points, even if I don’t agree with all of them. ¡Gracias!