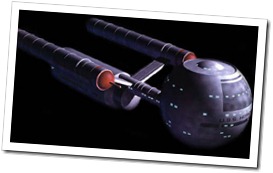 Last week I posted about my plans to run a Star Trek game sometime in the future. Focus of the campaign will be the adventures of the USS Daedalus (the first ship of the Daedalus-class) and its crew. The campaign begins shortly after the Enterprise TV series ends. Currently I am not 100% sure if the Earth-Romulan war shall be part of the campaign or already history. But even if the war is part of the campaign it’s just supposed to be the prelude to a larger sandbox campaign.

Sandbox campaigns are quite popular when running old-school games and in my opinion they are a good fit for a Star Trek game. Although the Captain of the USS Daedalus will have been given a mission by Starfleet Command, he or she is pretty much acting on their own for the most part. Subspace communication does not always work that great, so space ship captains have to make decisions without getting specific orders from Starfleet. And I thought it would be best to provide my players with the same freedom.

Although exploration should be one of the themes of the campaign, I think the players should have a basic idea of what kind of systems they will encounter on their travels. That’s why I probably start by creating a map of the sector of space the USS Daedalus will operate in. Of course it will not be 100% accurate and there might be enough room of improvisation if needed. Perhaps the map the players will be provided with is an old Vulcan star chart. Since they never bothered to closely examine every single system, there’s still a lot to explore.

Whenever the players are unsure what to do next, I can easily throw in a premade mission. But the rest of the time I’ll try not to railroad the players in any way. The space sector they are exploring should be like a living and breathing world (or rather worlds) where events happen even when the players are not looking.

That said I have never actually run a real sandbox game before. So while the idea of a “sandbox in space” sounds like a fun thing to do, it may utterly fail when I try to run it. If you have any tips on running a sandbox game in the SF genre, feel free to post your advice below.

On the History of D&D