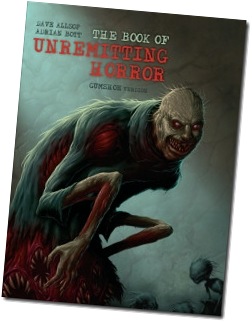 As a GM I love the horror genre. I think I have some talent for setting up a creepy atmosphere on the gaming table and I love confronting my players with unsettling mysteries. Luckily my players agree. My favorite sub genre as a player and GM is definitely investigative horror. Back in the day we played a lot of Call of Cthulhu and some Chill. Today my favorite horror games are powered by the GUMSHOE system created by Robin Laws who is one of my favorite game designers.

The Book of Unremitting Horror is a sourcebook for two GUMSHOE games by Pelgrane Press: The Esoterrorists and Fear Itself. I have to admit I haven’t read Fear Itself yet, but from what I understand both games are set into the same game universe. In this alternate version of our world, a group of loosely affiliated cultists try to rend the fabrics of our reality. In The Esoterrorists the players are skilled investigators, members of the Ordo Veritatis who investigate strange events and enforce the unwritten laws of civilization against the Esoterrorists while in Fear Itself the players are pretty much Average Joes.

TBoUH is a 221-paged softcover book which you can get directly from Pelgrane Press, your favorite game store or from DriveThruRPG. By the way, since Pelgrane Press is part of the Bits & Mortar initiative, you always get a free PDF copy of the book with the purchase of the softcover book!

On the first glance TBoUH looks like your typical monster handbook. But it actually isn’t. It’s more than that. One the one hand TBoUH describes a universe that are slightly different from the standard Esoterrorists world. In the standard Esoterrorists game some of the horrors presented in the book are just folkloric and don’t exist yet. In the World of Unremitting Horrors the world is truely haunted and all these creatures have existed for a long time.

The introduction contains not only some tips on how to use this book, but also a set of new rules for GUMSHOE. TBoUH adds Pathology as an investigative skill to The Esoterrorists, describes a few new monster abilities and adds Alcohol and Drug use rules for both supported games, to list a few of the changes. 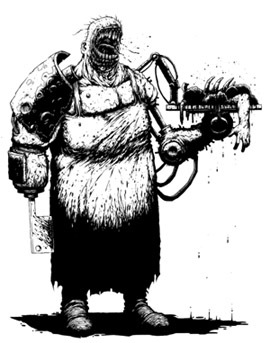 The majority of the book contains multiple page long descriptions of the unremitting horrors mentioned in the book’s title. These are not just simple descriptions of monsters you can throw at your players, but detailed descriptions of horrific creatures, the clues they leave behind and what investigative skills can tell you about these horrors. These descriptions are mostly written in character (in form of diary entries or eye witness reports) and are quite graphic -nothing for the faint of heart! By the way, you shouldn’t read TBoUH when riding on the bus or train. You’ll definitely get some weird looks by the other passengers, because of the prominent black & white artwork in the interior of the book.

The quality of the writing in the “horrors” section of the book is extremely good. I have to admit some of the stories in there are very creepy and quite disturbing. That’s exactly what I am looking for in horror games. And while some of the horrors are clearly inspired by well-known monsters from mythology, superstition or pop culture, the majority is very fresh and unique. That’s the reason I won’t be discussing the horrors in detail in this review, because I don’t want to spoil anyone. But rest assured that you’ll get a lot of inspiration for your GUMSHOE campaigns.

The next section contains a two-paged description of the aforementioned differences between the Esoterrorists world and the World of Unremitting Horror. This section also provides guidelines on how you can use both artifacts and monsters in your campaign.

The both adventures Crook’s End and The Final Case are fully fledged out adventures for both Esoterrorists and Fear Itself. Both are designed in a way that they can be easily adopted to suit your campaign. Even though The Final Case is set into contemporary London, a GM should have no trouble moving the action to any other modern city. Both adventures also contain a lot of tips on how to run them. There are also some guidelines on how to run non-linear games in GUMSHOE.

In my option The Book of Unremitting Horror is a must-have for any GM interested in running horror campaigns, regardless if he/she is using a GUMSHOE game or not. Because of the rules-light nature of the GUMSHOE system and the fact that TBoUH mainly contains fluff, it should pose no problem to convert the creatures to any game system used. If you play any d20 System game, you can also pick up the d20 version of this book, which is also available from Pelgrane. The horrors presented in the book are a welcome change from standard horror fare and can be used to turn any Esoterrorists campaign to eleven!

Thanks to Simon Rogers from Pelgrane Press for providing me with a review copy.

NaGa DeMon: The first step is always the hardest